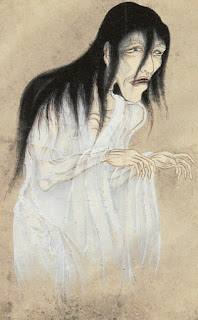 Known by a variety of names around the world, and appearing in different types and kinds, spirits, or non-corporeal entitites, are known by all cultures. In Japan, the term Yurei is one of many used to describe NCEs. Some consider the Yurei as spirits "temporarily" released from hell to complete an outstanding mission.

Souls who die violently, do not receive proper funerary rites, or die while consumed by a desire for vengeance, Yurei are believed to not pass on peacefully to join the spirits of their ancestors in the afterlife. Instead, their souls become ayurei souls, capable of travel back to the physical world.

Buddhist beliefs claim that the journey from the world of the living (konoyo) to that of the dead (anoyo) can take 49 days. In this limbo-like phase, ayurei can attend to unresolved issues.

It is further claimed that there is a correlation between the degree of suffering in life and the severity of actions in the afterlife. It is reported that the intentions of ayurei are not always evil, but it should be noted that their actions are almost always damaging to the living they encounter.

Finally, it is believed that a yurei can only receive release from the prayers of the living--allowed the soul to pass into the underworld.

Acceptance of the existence of these disembodied souls was so widespread in Japan that by the 1800s they had begun to influence art and theater, inspiring Kabuki and Yūrei-zu (painted or woodblock print images).

Behind the Scenes
In Shades of War, readers were exposed to the shade, a remnant ghost some believe is more of an after image of the deceased. In Pale Horseman, a demonic entity capable of possessing the living and existing for centuries was introduced. In A Lucky Day to Die, formerly-human souls were corrupted into pale imitations of demons, trapped and harnessed for their power. In Spectral Ops, the spirits unleashed on the small French town of Moyenne were of greater variety, including what appeared to be traditional ghosts, banshees, poltergeists, and possessing spirits.

Spectral Ops: Island of the Damned continues the ghostly theme of the series, with the spirit war moving to the Pacific where readers will learn about Asian spirits.