Beat the heat with the Stone Soldiers! We're slashing prices so you can download, go to a cool, dark place in your home and read til it's not so hot again...

This past weekend, my family and I ran a booth for my pals Destroyerbooks at Louisville's Fandomfest. It was a long three days, with pitiful sales and not many convention goers, but there were two things that made it all worthwhile:

1. Seeing my daughter nerd out and grin ear to ear when she met Karl Urban and got his autograph

2. The amazing costumes we saw. Far more costumes than I expected.

One of my and my daughters' favorite parts of any fan convention are the awesome costumes. We snapped loads of pics this year, and below I'm going to put a few of my favorites. Most of the pics we took were from my oldest, and to be honest, I didn't know who they were. A lot of Anime, that were very nice, but not something I'd seen. I'll let her pick some of her favorites and add them later. 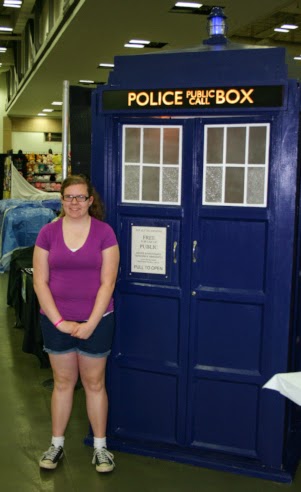 My teen helper flipped out when she saw this screen-quality Tardis on Saturday (both my girls are huge Whoovians). It was definitely a favorite at the show. We watched the hundreds in attendance take pictures with it all weekend. The Tardis was accompanied by a wonderful Dalek--if you can call a mass-murdering robot wonderful, that is. I was impressed when I first saw it, then they opened it up and revealed it was a motorized chair inside, so a person could ride around. I didn't see it in motion, but dang this thing was cool. 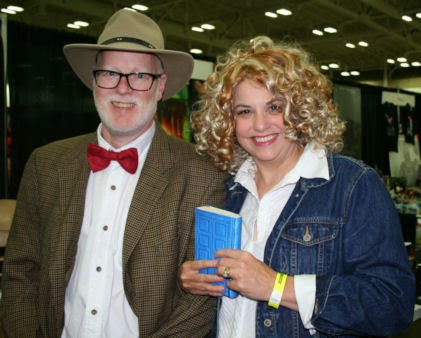 My daughter snapped this pic for me, of my favorite Doctor Who character, River Song. Now why won't my wife do something cool like this? And yes, River had her Lake Silencio six-shooter strapped on. 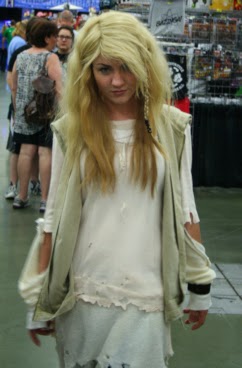 Of course, the cutest Doctor character in attendance was this young lady, dressed as the hologram Rose Tyler that guided the War Doctor. She is NOT Daenerys from Game of Thrones--despite people complimenting her on that character all day. She was THRILLED my daughter recognized her character, although I'm not sure who was more excited: Rose for being recognized, or my daughter Sam at seeing this unique cosplay. Best part was a few minutes after more pics were taken, Rose ran over and profusely thanked Samantha again for being the first person to correctly identify her. A really sweet girl with a great costume. 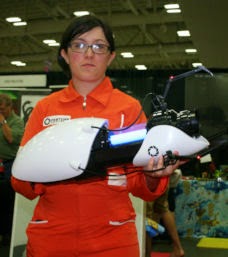 In addition to all the awesome Doctor Who fans in costume, we were really impresed with this Portal costume and working Portal gun. Super cool. Even if she "didn't have the boots yet". 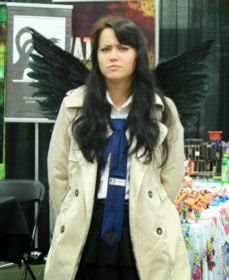 And, of all the Castiels we saw all weekend, this is the only one I recall with wings. I wish we'd have talked to her, as in looking at this photo, she would make a great model for one of the characters in Stone Soldiers--Josie Winters. If she was local and does model, this was really an opportunity missed. Great costume though, and I love how she hammed it up for my daughter's pic. 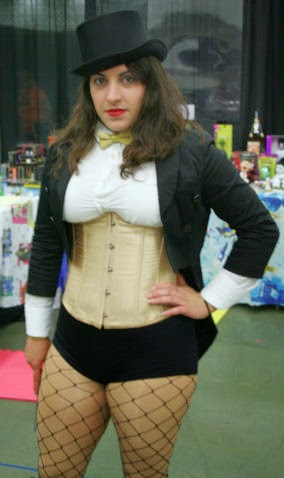 What impressed me most about this Zatanna was not her great costume, but the fact she actually knew who Remo Williams was! We were there representing our pals at Destroyerbooks.com and she stopped after we took her picture to look over the books and told me she remembered the Remo Williams movie from when she was a kid. I was kind of surprised that she knew the character as young as she is, but obviously anyone who has such a great costume is definitely cool enough to know the Destroyer! 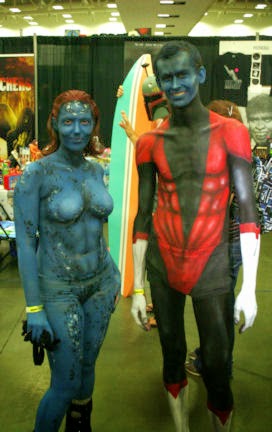 Now, most guys would have looked at this girl and started drooling, but considering my age, and the fact my oldest LOVES the character Mystique, I was more interested in getting a picture for her. And I want to point out something not so obvious: both of these folks are talented artists. They had to have painted each other! And the details were impressive, especially the muscle tones. I was curious and wanted to ask how long this took, but I didn't want to seem like some creepy old dude, so just thanked them and let them go on their way. Very impressive, even if Nightcrawler's tail was painted on. (also, NIGHTCRAWLER!!!! Nice to see him at Fandomfest since those turds at Fox dropped him from the movies...) 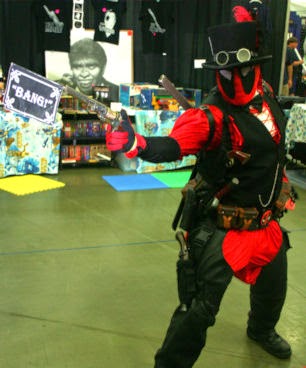 A great version of an established character is a lot of fun, but I like the creative twists on characters, like this awesome Steampunk Deadpool. My youngest would have loved to have seen this, but she'd gone home already so she had to settle for this picture. 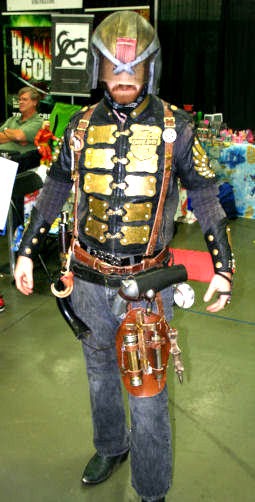 Okay, by far this is the most awesome Steampunk anything I've ever seen. I wanted to grill this guy about this incredible costume but let him wander off. Good thing too, as moments later, Karl Urban passed our booth, walking around, checking the show out. He bumped into Steam Dredd and they talked for several minutes. I wonder what they said? 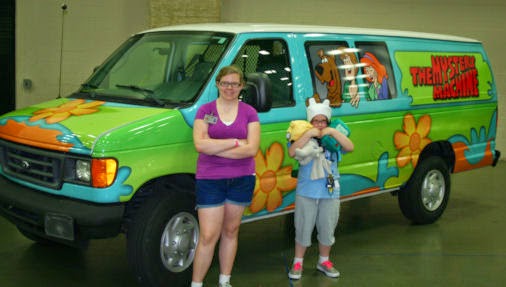 Almost forgot, there were cars at the show too. We're all big Scooby Doo fans in our house--when my oldest was 6, I even handpainted a Barbie Van to make the Mystery Machine for her birthday (there were Scooby Barbies out back then), so I HAD to have this picture of my girls. Despite their protesting and complainign they didn't want their picture taking. Hey, I EARNED this photo. Sucker's going up on my desktop. 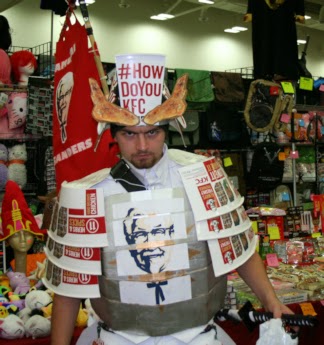 Custom costume sometimes work and sometimes don't. This one totally works and is truly incredible. I wish we could have gotten a better pic of all the amazing work in this Kentucky Fried Samurai armor. It was incredible. 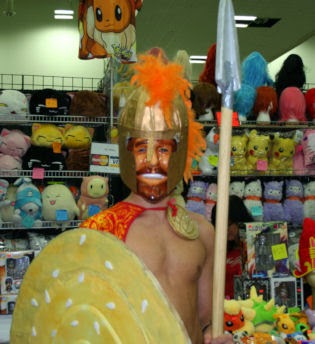 Accompanying the KF-urai was the Spartan Burger King, a truly clever spin on costuming, even if it is, well, spartan, compared to the KFC Samurai. 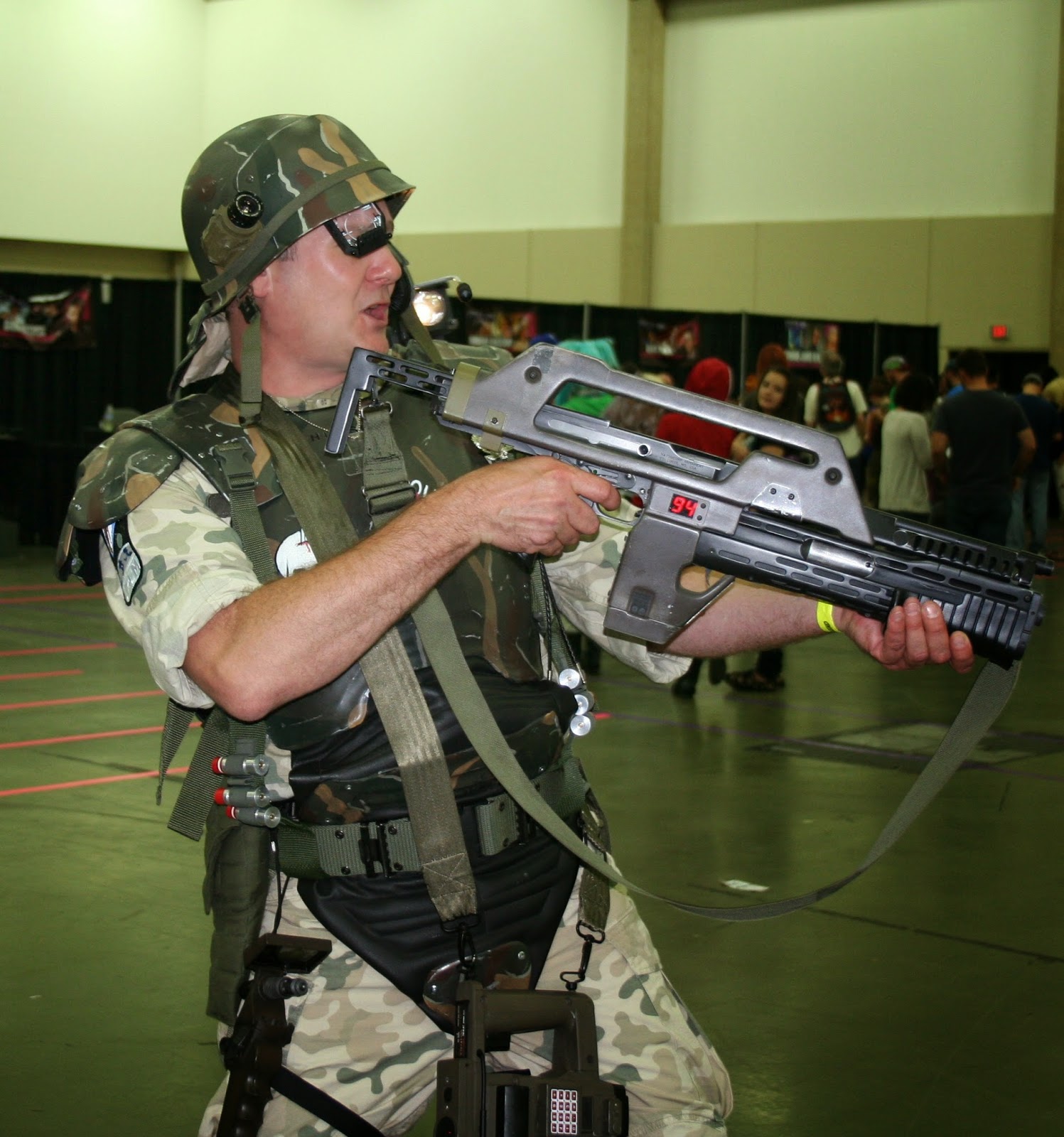 Finally, the most awesome costume I have ever seen in my life was this guy's Colonial Marine. You can't tell it here, but this was so detailed and incredible. It was beyond screen-quality. Not only was every little detail there, and the rifle was really metal with a functioning ammo counter, but his helmet was unbelievable! 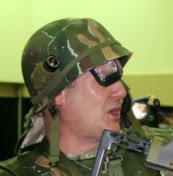 Not sure if you can make it out, but the eye piece, in addition to raising and lowering, actually lit up with information!!!!! And the helmet was actual metal. The marine told me he'd wished he had made it plastic, rapping it with his knuckles to reveal the sheer awesomeness of it. This is really a costume that has to be seen in person to fully appreciate.

That's all for today, but I'l let my teen pick some of her favorite animes, and tell me what they are, and post them later.

Thank you to all the cosplayers for making this show fun!

Thanks for your support!

Thank you to all the great folks I met this weekend at Fandomfest 2014, in Louisville, KY.

Had a lot of fun promoting Stone Soldiers and my pals at Destroyerbooks. Greatly enjoyed meeting all the swell Destroyer and Supernatural fans in the area. Looking forward to the next convention.

Check back later this week for pictures we took of all the great cosplayers' and a list of links for all the folks we met.