Sorry to say, I missed my deadline this year and Stone Soldiers #10, A Lucky Day to Die isn't done yet. Almost, but not quite.

To tide you over til then, here's a few pages of what was supposed to be this year's Halloween release...

As he looked down at his corpse, Mark Kenslir knew that he was dead. It was an odd feeling--one of regret and possibly a bit of relief. And while he wondered what now lay ahead for him, he could not look away from the body that had been his for so many years, now unceremoniously shoved into the trunk of a large sedan.

Nearby, the two men who had murdered Mark toiled in the darkness, digging a shallow grave in the sand. One of them abruptly stopped digging and turned to face Kenslir.

"Hey! Get out of here!" Francis Shirley shouted. "Shoo!"

Beside Francis, Leonard DeFazio paused and turned to see what his partner in crime was yelling about. "That's why you never let 'em know they're about to die."

"What difference does it make? Dead is dead!"

"The difference," Leonard said, frowning, "Is that when they know they're gonna die, they think they have unfinished business. And that is what you end up with. That's why I said two to the back of the head."

"Go on, shoo!" Francis declared again. The young mobster was clearly unnerved by the ghost watching him. He climbed out of the grave and stormed over, waving his shovel at Mark Kenslir.

"Leave him be," Leonard ordered, following Francis to the car. "Help me with his body."

"You don't know who you're messing with, ghost," Francis declared. "I'm a made man!"

Leonard smacked his boasting young partner in the back of his head, making his greasy black hair flop forward onto his face. "I said help me with the body!"

Francis sulked, but did as he was told, keeping an eye on the ghost that stood there, silently watching them. Moving to the trunk of their car, he lifted the feet of the tall body in the trunk clear, while his balding, fifty-something partner grabbed under the corpse's shoulder.
"Big sumbitch," Leonard growled.

He and Francis stumbled along in the dark Nevada desert, carrying the big body to the shallow grave they had dug. Blood and brains dripped onto the sand as they carried the body, falling from what remained of Mark Kenslir's face.

Francis kept glancing back at the ghost that stood silently by their car, watching them.

"Hey! Fuggettabout that ghost!" Leonard snapped when Francis nearly dropped his end of the corpse.

"I don't like the way he's looking at me... is he gonna haunt me now?"
"Nah," Leonard answered, dropping his end of the body into the shallow grave. "He'll just stick around here. That's why we bury 'em so far out of town."

"Ah," Fancis said, an evil smile spreading across his face. "He's bound to his body."
"No. He ain't bound to nuttin'. But he's just a ghost now. Most folks can't even see him. He's got nowhere to go and no one to tell. Eventually, he'll move on."

Francis shrugged and picked up his shovel and joined Leonard in filling the grave.

"Ha!" The younger mobster laughed. "Serves him right, stickin' his big nose where it didn't belong."

He turned back to the car and shouted at Mark Kenslir. "I hope you enjoy the desert, you stinkin'-"

"What is it now?" Leonard growled, looking up. The color suddenly drained from his face as he saw red and blue flashing lights headed their way.

"Dammit! I told you we didn't need any headlights to get here!"

Francis looked scared now too. "I'm still new to this, old man! I can't see in the dark as good as you!"

Leonard threw his shovel down and reached behind his back, pulling a small revolver from his waistband.

Francis' eyes went wide as he looked at the gun pointed his way. "Why does it have to be me? I just got this body!"

"'Cause you can't keep your damn mouth shut, that's why!"

Francis staggered a step, then his body went limp, dropping to the sand and nearly tumbling into the shallow grave he'd just helped dig. Where he had been standing, a black outline hovered in the air, shaped like a man.

The dark shadow swept forward, merging with Leonard's body and vanishing into it.

Leonard looked at the gun in his hand and considered shooting himself. But they were too far from the Strip. They'd never make it back. He had no choice.

Leonard threw the gun down and put his hands on top of his head, interlocking his fingers.

"I hope you're happy," he declared, glaring at Mark Kenslir's ghost.

Kenslir was anything but happy. He'd just been murdered and dumped in the desert like garbage. He scowled and fumed, his translucent, ethereal fists clenched in impotent rage by his sides.

Then a smile crossed his face as the lights of a police vehicle came closer. His murderers were wrong about one thing. Mark Kenslir did have someone he could go to. Someone he could tell about his death.

Wrapping up at Frightnight Filmfest 2014

Today marks day 3 at Fright night Filmfest, put on by the Fandomfest folks. Once again a well-organized show... it's just missing visitors. If youre in Louisville today swing by--plenty of walking room. 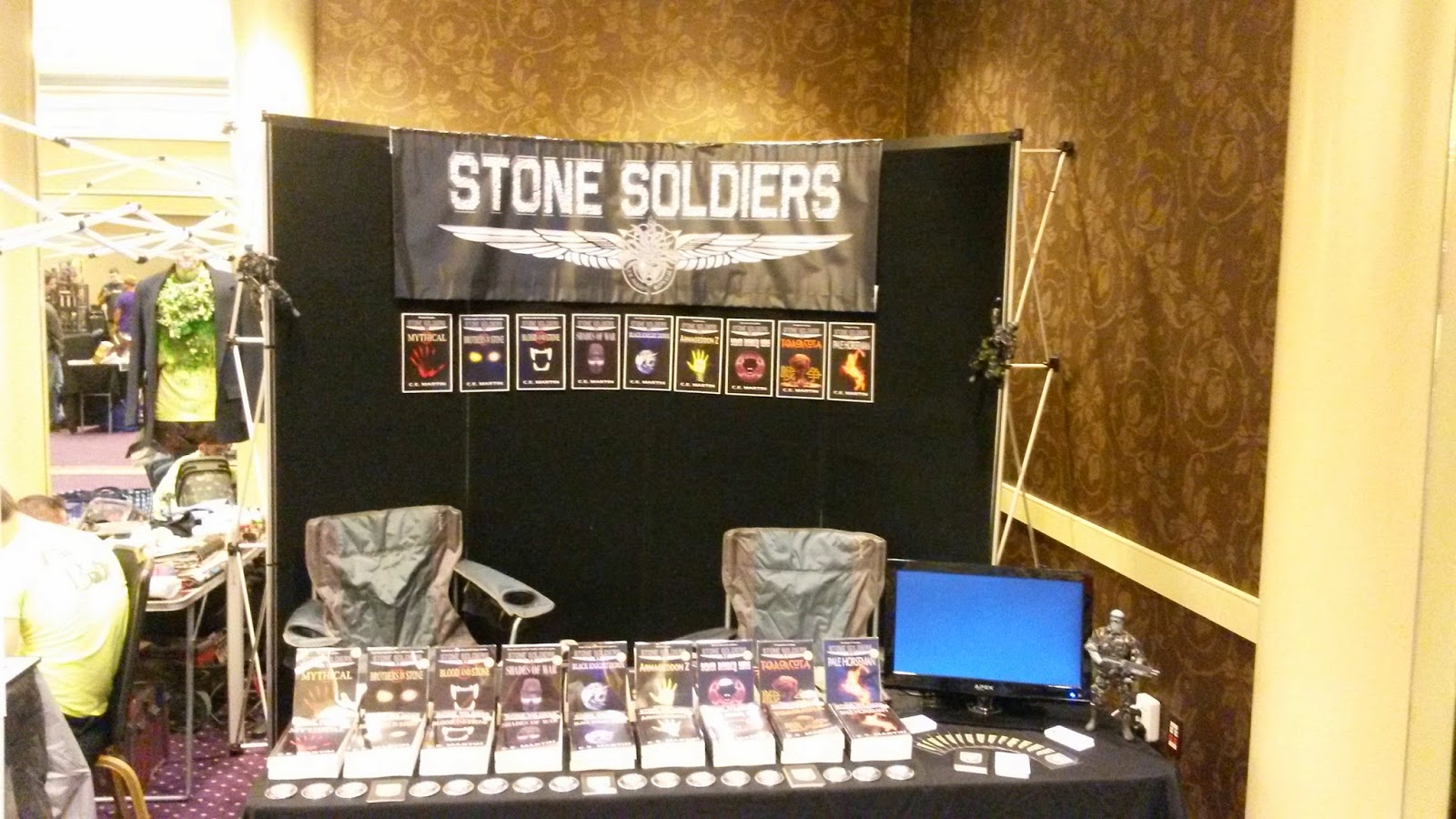