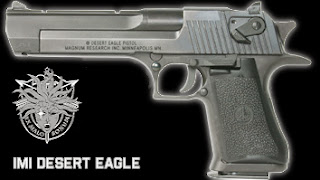 Ever since it was first introduced, the semi-auto magnum from Israeli Military Industries has been a favorite for film and books. It's appeared in the hands of darn near every action hero and heroine to grace the screen and comics.
The pistol has been in production since the 1980s, in over twenty variants and at least five different calibers. It is a magazine fed, semi-automatic handgun boasting a unique triangular-shaped slide and utilizes a gas-blowback system normally found in rifles.
For the Stone Soldiers, the Mark XIX variant is used, in .50 Action Express caliber- a round sufficiently strong enough to drop any human, and most inhuman targets (which is understandable given the round's design for use in medium to big game hunting). With a seven round magazine, plus one in the chamber, the XIX offers a much larger, and far more powerful round than the aged M1911 once used by the Detachment. Weighing in at over 4 pounds, the Desert Eagle is a heavy weapon best left for use by super soldiers.
at 1:37 PM No comments:

Like any tool, there are a wide variety of different designs for the knife. Some are for cutting, some for skinning, some for stabbing. Knives have been an integral part of a soldier’s kit for many centuries.
The Bowie Knife is a multi-tool of sorts, designed in the 1800s for the famous explorer/adventurer Jim Bowie. The knife rose to popularity after the Sandbar Knife fight.

A Bowie knife is wider than most other knives of the time- it is able to be used to chop wood, and it has a clip point ideal for stabbing. Modern Bowies often incorporate a serrated or sawtooth edge on the top of the blade, further adding to the knife’s versatility.

Most modern US Military forces use the M9 Bayonet as a knife. While similar to a Bowie, the M9  is more designed for use as a stabbing weapon, attached to the end of a rifle, or as a simple knife.

The Stone Soldiers need something considerably more durable. A Bowie knife with its wide, heavy blade, available in lengths rivaling the gladius of ancient times. The Bowie can be thrown, used to slash or stab opponents, and is of thick enough construction to withstand the heavy abuse a superhuman soldier might inflict upon it while dispatching monsters.
at 4:21 PM No comments:

Time for another installment of Weapons Wednesday when we examine the weaponry of the Stone Soldiers series...

And King among shotguns is the Atchison AA-12. A stainless steel, plastic-enclosed, magazine-fed monster, the AA-12 can unleash a devastating amount of firepower in the form of .12 gauge rounds. It is fed by either removable magazines (8 round) or a drum (20 or 32 round). With a fire rate of 300 rounds per minute, the AA-12 is easily capable of felling human and inhuman alike- and it’s the longarm of choice of Adrien Brody’s character, Royce, in the 2010 movie Predators.

Not only can the weapon’s recoil-absorbing design allow it to be fired by even the most delicate of shooters, but its stainless steel construction means it will stay cleaner, longer, with no oil needed.

Alas, the U.S. military seems to have instead adopted a derivative of the AA-12 for use- the USAS-12. Produced by DaeWoo Precision Industries, the USAS-12 features a more familiar design, with an M-16-style grip and carry handle. It’s .25 kg heavier than he AA-12 (at 5.45 kg). But, it does pack a little more whallop though, with a 10-round magazine or a 20-round drum. However, the stats I’ve found list it as only firing 260 rounds a minute.

Why then did I choose the USAS 12 over the AA-12 for Colonel Kenslir? Well, I don’t believe the AA-12 made it into regular U.S. inventory. And a semi-auto only version of the USAS-12 is made in my home state of Indiana.

You can see the USAS-12 in a number of Stargate SG-1 episodes- particularly in the Replicator episodes where it rains pellets of destruction down on swarms of the little robots.

This Fourth of July, you don't have to be American to celebrate.
The Stone Soldiers prequel short stories are all FREE on Kindle. 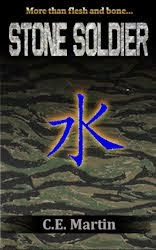 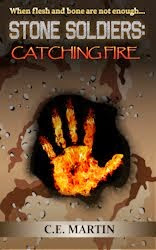 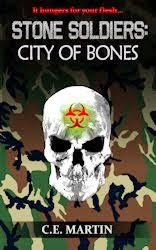