As work continues on the upcoming Shadow Raiders, and research begins for Stone Soldiers #12, Winters' Fury, we take a moment to look back--way back--to the late 1800s and the state of paranormal warfare in America during the heady days of the Wild West. 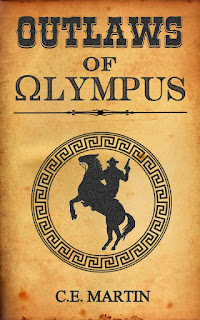 1881, Utah Territory. Immigrants continue to flood into the Wild West, bringing with them their customs, cultures, and legends from the Old World. But it isn't just men that have come to the new Frontier. Darker beings have come as well, intent on once more terrorizing mankind in a Godless land. Can a cursed cavalryman and a mysterious priest work together to stop a supernaturally-fast gunslinger, or will the old gods claim the land and souls of men for themselves?

So what is Outlaws of Olympus, and how does it relate to the Stone Soldiers?

Way back in Stone Soldiers #5, Black Knight Down, readers were introduced to Father Lee Schuler, who turned out to be Hercules, the son of Zeus. Schuler assisted the team in battling the Titans trapped in the Black Knight. He showed up again in the end of One Dark Step (Stone Soldiers #11).

In the recent Shadow Detachment series of prequel short stories that showed the history of Detachment 1039 since the Korean war, another character was revealed: Bartholomew Black, a special operations Army Officer who seemed very at ease in dealing with the supernatural. Black remained in most of the Shadow Detachment tales, rising through the ranks and guiding Mark Kenslir in the war on evil.

Both of these characters now have their own series: Outlaws of Olympus.

Hercules, as Father Sergio "Ercole" Morricone is dispatched to the Utah Territory by the Church in 1881, to investigate reports of a man who can't die. Along the way, he meets the mysterious John Smith, a black cavalryman left for dead by a supernatural gunslinger "faster than lightining".

Together, the duo face off against this adversary, who is revealed to be the Greek god Hermes, the half-brother of Ercole and the fastest gun in the West. Hermes reveals that he is not the only Olympian to descend on the Godless frontier--others have come along...

So begins the adventures of Father Ercole and Bartholomew John Black--a man cursed to live the lives of all the men he's ever killed. Together, this mighty duo will do their best to save the West from the dark grip of monsters and immortals alike.

Outlaws of Olympus releases every three weeks on Kindle, and on print through Amazon.com. Look for audio releases as well, with the first round of the series culminating in thirteen tales of Weird Western wonder!