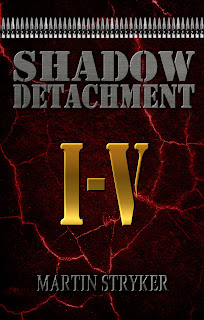 They say that two heads are better than one, and when it comes to Action and Adventure, that definitely holds true.

The greatest action-adventure series of all time, the Destroyer, was created and written by two amazing authors: Richard Sapir and Warren Murphy. Over the years, these two giants of two-fisted action churned out dozens of novels. Following Mr. Sapir's untimely passing, Warren Murphy continued the series, partnering with ghost writers like Will Murray, Jim Mullaney, and Gerald Welch. Five decades and over one-hundred-and-fifty novels later, the Destroyer keeps on kicking butt and dispensing justice.

For 2018, The Stone Soldiers of Detachment 1039 are doing the same. Starting with the oldest Detachment story, "Shadow Detachment", all the Stone Soldiers series are being combined into one, numbered chronologically, re-edited, revised and re-released with the help of ghost writers under an all new author name: Martin Stryker.

And the revolution has already begun.

Beginning in December 2017, the Shadow Detachment series has begun re-releasing revised editions once a week, revealing the origins of the magic-and-monster-fighting unit in 1950 (Shadow Detachment) and continuing through the 1960s, 1970s, 1980s, 1990s and into the 2000s. By Summer 2018, the Stone Soldiers stories readers have enjoyed will be re-released as well, continuing the decades-long battle against the forces of darkness both on an off-world.

Look for new releases weekly, including compilations of the shorter novellas, in their proper reading order, with a handful of all-new stories added in:

RED MAGIK, a tale of 1980s espionage that sees Mark Kenslir slipping behind the Iron Curtain to steal the head of Medusa from Soviet Sorcerers before they can unlock its ancient secrets

DARK POWDER, a tale of 1990s drug interdiction set in South America as the Detachment fights a Cartel relying on supernatural forces to seize control of not only the drug trade but of the minds and souls of addicts around the world.

MAGICIAN OF INTEREST, an early 2000s adventure that puts Colonel Mark Kenslir on the side of evil, protecting a renegade witch-turned best-selling author as her former peers seek to silence her tell-all books before the world-at-large learns their deepest secrets.

ISLAND OF THE DAMNED, the delayed third installment of the Spectral Ops story arc that finds the Detachment fighting armies of the dead being raised around the world. In this installment, a mysterious island in the mid-Pacific is inadvertently discovered when a passenger jet crashes, turning survivors into prisoners in a paranormal penal colony built centuries go and now home to the greatest monsters of the ancient Japanese empire. Can Detachment 1039 rescue the civilians of Flight 618, or will America's greatest supernatural soldiers become the newest inmates of the Island of the Damned?

But just who is the other half of Martin Stryker, willing to join C.E. Martin in 2018? Check back soon for more on the anonymous, mysterious ghost writer-half of the Martin Stryker team....
at 10:12 PM No comments: