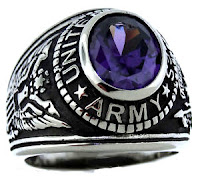 Derived from the EDK (Etheric Dampening Knives) used by the Detachment since 2014, EDR's are comprised of an amethyst (or other quartz crystal) embedded in an electrum coil-setting, and set in a silver ring. Disguised as Armed Forces rings, these devices effectively store Etheric energy for later use, or, in the case of the petrified Stone Soldiers, allow the wearer to be turned human and maintain that state for a period of as much as twenty-four hours.

The rings can also be used to prevent lyncanthropes from transforming, can absorb non-corporeal entities, or draw the energy they have collected to manifest, and can safely draw etheric energy being channeled by a magic user, disabling their ability to spell cast or wield magic energies.

EDRs can also affect entities on the spectral or astral planes, so long as they have accumulated some kind of charge. In this way, non-corporeal entities operating on the physical plane can be affected by a touch from an EDR,

EED technology is also incorporated into shackles, manacles, and neck restraints, but are capable of storing a far greater amount of energy.

In the event an EDR absorbs too much energy, it will begin to overheat. If the silver of the ring does not deform, the amethyst crystal will slowly turn to a clear state, losing all color and the ability to form the etheric energy storing construct. At this point, the crystals can crack or burst from a sudden discharge.

Behind the Scenes
After the introduction of the Lotus Ring in Stone Soldiers #8, Terrorcota, and a few confusing reviews, it became apparent that there was a way to turn Stone Soldiers flesh and blood again. And given the precedent set in the books that amethysts can store magic/psionic (etheric) energy, it seemed like a ring made to resemble a military one would do the trick.

While it hasn't been worked into the books just yet, the process for a depetrification would be for either Mark Kenslir to nullify the enchantment of the Medusa & Basilisk eyes, or for Jason Trumball to drain all the energy from a stone soldier. The now-flesh candidate would then slip a ring on, to prevent re-petrification. In this way, the stone soldiers can enjoy time as regular men once more.
at 1:02 PM