Beginning June 26, 2013, every Wednesday is Weapons Wednesday at Stone Soldiers. A brief introduction to the weapons of the Stone Soldiers series and how they relate to the world of Stone Soldiers...
THE WORLD'S MOST POWERFUL HANDGUN SHOULD BE FULLY AUTOMATIC 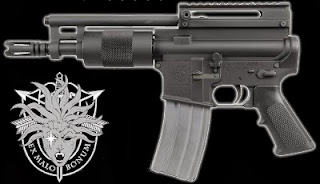 Built by Olympic Arms, the OA-93 is a scaled down version of the AR-15/M16/M4 used by the U.S. Military and forces around the world.
Firing a 5.56mm rifle cartridge, and using AR-15/M16/M4 compatible magazines, the weapons weighs in at a little over 4.5 lbs. It has been featured in a number of films and is actually intended as a two-handed submachine gun, rather than a handgun.
Two other, similar weapons were made by Olympic Arms, the OA-96 and OA-98.
at 2:12 PM 1 comment: 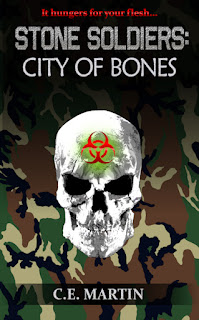 The military has succeeded in turning four men into living stone soldiers--and just in time. At a remote Nigerian oil site, the population of a small town have all vanished--except for their bones. The World Health Organization sends a team to assess the situation, but they are killed as well, the flesh stripped from their skeletons in minutes.

The Stone Soldiers are an inedible force deployed to the site, ready to fight the invisible enemy. But it turns out the billions of microbes hungry for flesh are working for someone, or something, else. 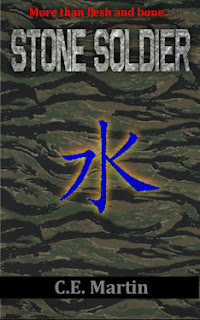 A Prequel short story to the Stone Soldiers series, Stone Soldier tells the tale of the first man of living stone, Captain Mark Kenslir, who is transformed in a secret government research site into something far more than human. Killed in fire, Kenslir returns to life with the ability to resist physical injury and heal nearly any wound.

Returning to duty, he finds himself deployed to 1962 Laos, where a MAC-V SOG team has vanished without a trace. Kenslir searches for the missing men and finds more than he bargained for: a Chinese Sorcerer and a Water Spirit--working for the Communists!

Kindle  Smashwords   iTunes   Barnes and Noble
at 12:50 PM No comments: