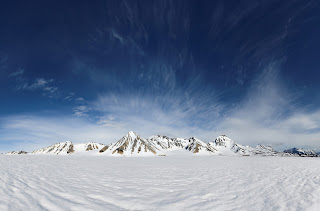 The mythical home of the North gods, Asgard, was found in the summer of 2016, when Doctors David and Julia Hammond led an archaeological expedition to Greenland, to excavate a massive pair of golden doors buried beneath the glacial ice. The Hammonds almost unwittingly triggered Ragnarok by opening the doors however, alerting the army of Odin to the fact the gateway to Midgard was free once more.

Asgard the planet lays in a parallel universe to our own--one of nine suspected parallel planes of existence, all connected by Yggdrasil, an interdimensional network of wyrmholes. The planet was presumably much like our Earth, but has undergone severe climactic changes in the past.

Asgard's axial tilt is far more extreme than our own world. The planet lies on a 75 degree tilt, with the north pole always pointed away from the sun. This extreme tilt has wreaked havoc on the planet, reducing the southern hemisphere to an uninhabitable desert, and the northern hemisphere a harsh, arctic zone perpetually in darkness.

Asgard's sole habitable region also lies in a perpetual state of dusk, well north of the equator. A single habitable region has so far been discovered, near the impact crater of Ymir. This region's capital is the city of Valhalla, which is connected by crude road networks to settlements throughout much of the eastern hemisphere's habitable zone.

The gateway to Midgard and the other suspected seven realities, are accessible through the network of wyrmholes in the Yggdrasil ravines south of the Bifrost Plain. This plain--a flat, grassland region--is so-named due to the constant Aurora Borealis overhead, which extends all the way north, past Valhalla.

Following the event of Operation Cold Flare in 2016, when the Asgardian Fellish army was defeated, a contingent of researchers and soldiers were established near Yggdrasil for the exploration of Asgard and to determine any strategic value. Similarly, the wyrmhole's gateway in Greenland was also fortified and is designated as an Annex of Thule Air Force Base, monitored closely by NATO forces.

Behind the Scenes
Shadow Raiders marked the first split from the regular Stone Soldiers series chronologically, and takes place between SS 11 and 12. Elements of Detachment 1039 will return to the world in future novels, exploring the other branches of Yggdrasil.

The entire story of Shadow Raiders revolves around a recurring theme in the Stone Soldiers universe: that Fallen Angels posed as gods in ancient times, luring humanity to worship them. In the Christian era, no Fallen Angels remain on Earth. In One Dark Step, the Stone Soldiers encountered the first Fallen Angel in the series, Hubal, living on the Moon. Aurg-El, posing as Ymir, and animating his Fellish descendant, Odin, ruled over Asgard, sending raiding parties through to Earth for servants and slaves. However, the little ice age sealed the gateway to Earth, preventing any further travel.

The impact crater revealed in Shadow Raiders is indeed where Aurg-El impacted the alternate Earth, hurled from heaven, his impact tilting the world off its normal axis.

Readers are correct in assuming that of the eight branches of Yggdrasil, only one leads to Earth (Midgard). In future installments, we'll return to the Wyrmhole "tree" and journey to other worlds, each ruled by other Fallen Angels from mythology. The current plan is to release one installment of this Shadow Raiders series per year. For 2017/2018, the next installment will focus on Chinese Mythology and center around a world the inhabitants have named Perdition.
at 1:36 PM