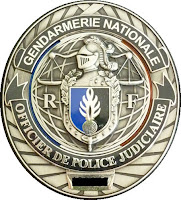 Description:  Member of the French Gendarmerie

Assigned to the tranquil town of Moyenne, France, Mathias Delage was a member of France's Gendarmerie--one of two national police forces in the country.

Having survived the initial spectral invasion of his town in April 2017, Mathias led a small group of survivors to a church on the outskirts of town, eventually taking in the remnants of the French Army's Paladins sent in response to the supernatural incident.

Mathias' knowledge of the town made him an invaluable addition to the remaining Paladins' cooperative effort with Detachment 1039 to rid the town of the unleashed phantoms. During the course of the operation, Mathias was unfortunately possessed and killed by the rampaging entities.

In the aftermath of the incident, publicly declared a terrorist incursion by refugees, Delage was recognized for his sacrifice with a commemorative plaque erected in his honor in the center of town.