Good news for fans of squad-level, military vs monsters novels.
Seal Team 666, by Weston Ocshe (Thomas Dunne books) has been greenlit for a movie starring Dwayne "the Rock" Johnson.
Seal Team 666 has two books out, and is available on Kindle. It seems to follow a SEAL team battling demons or something.
Combined with Stone Soldiers, Bob Meyer's Area 51 Nightstalker series and Myke Cole's Shadow Ops series, it appears that Seal Team 666 isgoing to bring the military vs monsters sub genre to the popular forefront. We just need to come up with a clever name for it. Milfic?
If you know of any other similar series, list them in the comments.
at 1:33 PM 1 comment: 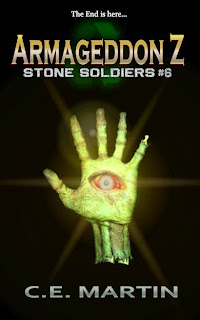 Kenji Nakayama has seen the end of the world--and it isn't pretty. Those killed by a horrific plague have risen up, reanimated and eager to kill. Those that have survived struggle to find somewhere safe. For Kenji, this nightmare never ends--no matter how many times he dies.

That all changes when the young precog encounters the Stone Soldiers, rescuing survivors and slaughtering zombies. Kenji learns that the petrified super soldiers could have prevented the apocalypse with a little forewarning. Luckily for them, Kenji can do just that--by going back and experiencing it all one more time.

Can the men of living stone save the world with Kenji's help, or will the monster behind the undead apocalypse prove more than even a super psychic can handle?

Kindle   Smashwords   iTunes   Barnes and Noble
at 2:20 PM No comments: