I've admitted it- I tried to use the wonderful Doc Savage novels as a model for how the Mythical series should be paced and structured. But that recently got me thinking... how much do Doc and his Brain Trust share in common with the men and women of Mythical?
Let's start with the leaders. Doc Savage and Colonel Mark Kenslir.
Doc Savage is a large man, about 6'2" if I read correctly. He is covered in muscles and is in peak physical perfection. He never seems to age, due no doubt to his clean living and a scientifice diet. He's also a super-genius, an expert in many fields, and the world's greatest surgeon. Doc looks a bit odd as well, with bronze-hued tan skin and flake-gold eyes and his hair cut very short, resembling a skullcap. He is a master at unarmed combat and carries a variety of scientific devices with him at all times. Doc primarily lives on the 86th floor of the Empire State Building and has a fabulous, untold wealth of Mayan gold. Doc is an accomplished pilot, diver... pretty much any skill needed, he has. Doc was a fighter pilot in the US Army in World War 1.
Mark Kenslir is 6'4" tall, and also overly muscled. He never does age, due to the multiple curses on him. He's not a surgeon or a scientist, or even a super genius. He has jetblack hair, cut in a short flattop, and has black-green eyes. He is a master at unarmed, and armed combat, and uses a variety of devices and weapons. He resides in a 22 story tall building just outside of Miami, FL. As a sixty-three year veteran of the military, he has undoubtably accumulated a fair amount of money. He is a skilled combatant, who's exact training and abilities remain to be seen. He fought in the Korean War and most conflicts since.
All in all, the two are very similar. If we took it literally, Doc would lose any hand-to-hand fight. Mark Kenslir has super human strength, and can heal any wound. While Doc seems super human, he does face the limitations of mortality. When it comes to crimefighting or solving mysteries, Doc clearly has the advantage. Mark Kenslir is a veteran soldier, skilled at warfare. He may have other skills, but he relies on support from the U.S. Armed Forces to help him solve most problems his own personal strengths can't solve.
But Doc Savage is more than one man, he is aided by his Brain Trust- the Fabulous Five. His former Army companions, who are masters in their own fields, and fearless adventurers who join Doc in his philanthropic globe hopping on a regular basis. They Are Col. John "Renny" Renwick, a massive, 6'4" man who is a master engineer, a taltented brawler and who enjoys punching through doors. Then there's Andrew Blodgett "Monk" Mayfair, a gorilla-looking master chemist who is second only to Doc in fighting, and scientific ability. General Theodore Marley "Ham" Brooks, a dapper attorney of wide-renown and master swordsman. Major Thomas J. "Longtom" Roberts, an electrical engineer that possibly rivaled Nickolai Tesla himself. And finally, William Harper "Johnny" Littlejohn, a world-renowned archaeologist.
Doc's five aides always seemed to be on hand in the books to help Doc stop evildoers and protect the innocent. They were even aided on occasions by Pat Savage, a blonde-haired cousin of Doc who was a proficient fighter and crackshot.
Mark Kenslir commands a small detachment of super soldiers and paranormal support personnel tasked with defending the United States at home and abroad. In Book 1, Kenslir's has four Stone Soldiers- men turned to living stone, possessing super human strength, and years of combat experience. All but one of the stone soldiers are killed by their opponent. Kenslir soon begins rebuilding his operational team, turning a teenage motorcross rider into a new Stone Soldier, and enlisting the aid of a teenage girl who unlocks her own cryokinetic powers- possessing the ability to freeze things with her mind. In Book 2, Kenslir adds two more operatives, a spunky FBI agent, and her partner, a postcognitive empath who accepts the offer to become a man of living stone himself. The team is aided by the U.S. Military's Ghost Walkers- spies who use astral projection to gather information, first hand, from anywhere on earth- and telepaths who probe the minds of allies and enemies.
In Book 3, Kenslir will be joined by two more aides: Chadwick Phillips, a former super soldier gifted with electrokinesis, the ability to generate and control electricity, and who also becomes a stone soldier, and Dr. Laura Olson, a vampire.
There are similarities, to be sure. But the adventures of Doc Savage tended to revolve around stopping a single villain, a criminal mastermind, for succeeding in some villainous plan to make money. Rarely did Doc deal with politics or threats to national security.
Mythical may incorporate many of the elements of the Doc Savage pulps, but it features super-villains, and broader-reaching dangers.
at 1:34 PM No comments:

Tonight, in less than 4 hours, I go live, sort of, on the internet. It was all part of the self-publishing marketing process.
Podcasting is something I'd never actually listened to- I tend to be more of an orchestral music/movie score kind of guy. I just don't listen to talk radio or podcasts.
That changed with my entry into indie publishing. Some friends of mine happen to have a very long-running, award-winning podcast. Podculture.
Even though I'm kind of a private guy, I went ahead and joined the podcasters for a lengthy dicussion on indie publishing, the latest scifi on TV and of course, the Mythical series.
What did I learn about podcasting?
It's pre-recorded. I'm told some folks stream live, but most pre-record, then stream later, or just offer their podcast for download. I know- I'm probably the last person on Earth to learn this, but it was interesting, nonetheless.
You can get amazing sound in a room jammed with collectibles. To say that Brad, the guy who host's Podculture is a Green Lantern fan is a massive understatement. If there is any GL product on Earth he doesn't own, I would be surprised. It was wall to wall Lantern Corps, Oa, yeah. But despite the lack of foam walls, or headphones, Brad's professional setup records crisp, clean audio- although he did keep telling me to speak up. It was a far cry from the hollow, staticy tape recorder kids used in my day to play radio talkshow.
There's a podcast for everyone. Seriously the variety in podcasts is amazing. In Podculture's case, they talk about a little bit of everything, so they're bound to have a large audience.
Finally, I learned doing a podcast=sales. At least one. One Podcast listener from a previous show where my book just mentioned, purchased via Kindle and gave a glowing, four-star review (thanks, Billy). Actually being on a podcast and talking ought to equate to even more potential readers.
End analysis? Podcasting is good for authors. It's a lot easier than writing out answerrs to questions or saturating Twitter or Facebook with please for readers. Podcasting can be a lot of fun. And you don't have to dress up.
at 5:59 PM No comments:

What the heck,let's have a SALE!

You know, I was just reading some authors over at the Kindle Writer's Cafe forum arguing about to Free or Not to Free.
Some valid points are made on both sides.
Had I read this before, I might very well have put Book 1, "Heart of Stone" up for free. But since a few of you have purchased it, I don't think it's fair to now.
But let's have a SALE.
$.99, this week only.
KINDLE
NOOK
Smashwords
at 12:21 PM No comments:

Mythical the Series is rapidly approaching it's end- or rather the end of the first trilogy. I knuckled down and foudn the time to start writing in earnest yesterday and got about 40 pages done- something like 8000 words. I would have gone longer, but with a day job and kids to take to school today I finally had to quit and hit the sack...
So what's book 3, BLOOD AND STONE about?
<SPOILER ALERT>
In Book 2, the shapeshifters partially succeeded in their attack on Argon Tower, the base of operations for Detachment 1039. The twin giants manged to resurrect Medusa and steal her heart, granting Tezcahtlip the power to turn men to stone. Unfortunately, it cost him greatly, as his brother Ketzkahtel was finally killed.
Tezcahtlip has fled now, headed west to hit the two placesin America that have the highest concentration of parahumans: Las Vegas and Alcatraz. With a collection of stolen powers to choose from, the giant will do what anyone in his over-sized shoes would do: find a country in need of something to believe in, and set himself up as a God.
Det. 1039 will have to be careful pursuing this adversary into a foreign sovereign nation- to avoid an international incident and to avoid being destroyed by the all-powerful Tezcahtlip.
The team will be aided by two new members as Col. Kenslir rebuilds the Stone Soldiers. First up is his old war buddy, Chadwick Phillips, a paraplegic retiree who once could hurl lightning. A more mysterious figure from Colonel Kenslir's past will show up as well- one he's not sure he can trust, but who will hold the key to finding and stopping Tezcahtlip once and for all.
Look for BLOOD AND STONE at Amazon.com, Barnes & Noble and Smashwords October 1st.
at 9:12 AM No comments: 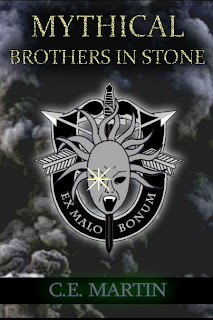 The shapeshifting Antedeluvian giant Ketzkahtel is back from the dead, once again tearing out and eating the hearts of American citizens.

Unfortunately for Kenslir, the giant is no longer alone. He’s resurrected his twin brother and the two giants decide to take the fight to the Colonel.

I had previously posted that the next Mythical book would be up and ready today, August 1st. Alas, the editing, and some rewrites requested by the Beta reader have delayed that. "Brothers in Stone" may not be ready for a few days. Not a very good start to any career I was planning in writing, but things happen.
To hold anyone over, here's the blurb for "Brothers in Stone"

The shapeshifting, Antedeluvian giant Ketzkahtel is back from the dead, once again tearing out and heating the hearts of American citizens.

Unfortunately for Kenslir, the giant is no longer alone. He's resurrected his twin brother and the two giants decide to take the fight to the Colonel.

A great big thanks to the kind folks at Long and Short Reviews! They have up my first official Book Blog review today.
I have to agree with their review 100%. "Mythical: Heart of Stone" is slow at the beginning. Painfully slow. But that's because it started as a screenplay and I was going for the slow, mysterious build up to action. That's been corrected in the sequel.
Thank you again, Orchid for your time and review!
at 12:42 PM No comments: