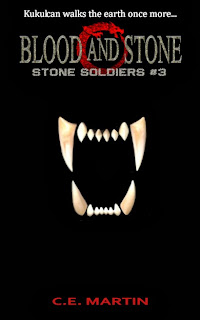 What would a horror series be without the Big Three- Vampires, Werewolves and the other Undead?

Stone Soldiers does indeed have Vampires- but they're not quite what you might be used to.

When I considered adding a vampire to the series, I struggled with what kind to go with. Classic, B&W, Bela Lugosi camp, with opera capes, fangs and a penchant for long, hypnotizing stares? Or maybe trailer-trash bandidos out to enjoy an eternity on the run, like those from the awesome movie Near Dark?

In the end, I decided to just take the most interesting characteristics of all the cinematic vampires and mix them up with a healthy bit of parody of the more sparkling, hedonistic vamps popular in the past couple of years.

In Book #3, Blood and Stone, we read about the origin of the Stone Soldiers' undead Doctor, Laura Olson. A college student in 1972, Laura was turned into one of the Undead by a vampire being pursued by then-Major Kenslir. Instead of killing Olson, Kenslir recruited her to work for the military- using her empathic link with other vampires to track their movements around the globe.

In the Stone Soldiers Universe, many Vampires may exist, but Dr. Olson falls into a basically-European classification. Her undead abilities are the result of having her lifeforce, not just her blood, drawn from her body to the point she was killed. She was then reanimated by the cursed lifeforce of the vampire who attacked her. As a result, Olson now requires human lifeforce to stay alive.

But not from drinking blood.

As Dr. Olson points out in Blood and Stone, she'd have to drink enormous amounts of blood to stay alive- meaning she'd be bloated and urinating all the time. Instead, her kind of Vampire severs veins to open up a path to the human heart- the organ most charged with lifeforce in the body. Blood swirling through the human body constantly picks up a kind of static charge- which is then transferred to the heart. The blood in the body acts like a conductive circuit for the vampires, allowing them to drain energy from the heart and the whole body. Very little blood is actually drunk by those vampires who've been around any real amount of time.

When a vampire is skilled enough, they then gain the ability to draw the lifeforce from the mouth of the victim- pulling it up and out of their body in a flashing, static discharge of blue, lightning-like energy.

In her many years serving as a Doctor at Alcatraz, Olson learned that such energy could be held within her and then passed on to others- healing their injuries in the same manner vampires heal their own bodies. Using this ability to heal with her hands, or lips, Olson is able to bring the non-petrified members of the team back from the brink of death and to regenerate their very flesh.

When facing off against superhuman opponents, Dr. Olson can also use her vampiric ability to drain the lifeforce from foes, momentarily depowering them. Or she can rely on her supernatural strength, speed and agility to engage in hand-to-claw combat. Vampires, it seems, can also control their bodies, and cause both fangs and long claws to grow from their mouthes and fingertips.

But physical enhancements aside, vampires possess one other abiltity shared in the supernatural world- an awareness of the mystical. Like other cursed creatures, or resurrected beings, Dr. Olson has shown the ability to see things an ordinary human cannot. And an ability to interact with intangible beings, like the rampaging spectres of Book #4, Shades of War.

Further, Dr. Olson has demonstrated a remarkable resiliance and resistance to physical injury- surviving impalements, gun shots, and even having every bone in her body broken. She has even survived having her heart ripped out.

All in all, the good Doctor is a formidable fighter and a great asset to Detachment 1039.

But not all vampires are so helpful. In fact, Dr. Olson may be the only vampire in the world that can be considered one of the good guys. if vampires do roam the world of Stone Soldiers, how would you kill them? Dr. Olson revealed that vampires aren't killed by the sun- that they instead suffer migraine-like headaches when exposed to ultraviolet light in their eyes. Sufficient exposure could kill them, but as long as their eyes are shielded, they can move about in the daylight with no problem. Some new vampires also are allergic to sunlight, but if their healing powers were at play, they would be able to resist.

The one effective means we've seen for killing a vampire so far in the series is to remove their head from their body, while their heart is damaged or destroyed- thereby cutting off their supply of stolen lifeforce needed to repair the damage.

Given that only Dr. Olson and the vampire who turned her have been seen in the series, it's a safe bet that vampires, despite their supernatural abilities, do not pose much of a threat to the modern military.
at 12:49 PM No comments: 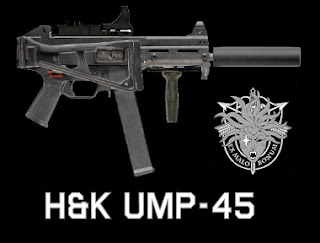 While H&K's MP5 is an acknowledged leader in the submachinegun category, used around the world by police and military, it does fire a fairly small caliber round- the 9mm Parabellum. This is great if you happen to be carrying a 9mm handgun- you have interchangeable ammunition (remember Die Hard- Bruce Willis was able to take ammo from a seized MP5 and use it for his Beretta 92 pistol).
But sometimes you might want something that packs more of a punch- and that's where the UMP-45 comes in.
Firing the .45 ACP cartridge, which is half again as heavy as the 9mm, the UMP incorporates a lot of the MP5's features, but in a much more target-stopping round. (There's also a variant that fires .40 S&W)
With more power though, there's more recoil, which meant the cyclic rate had to be dropped to only 600 rounds/minute (less spraying, more praying). The UMP can fire single shot, 2-round bursts and full auto. It features many polymer parts, reducing corrosion. It accomodates a number of attachments, from different sights to aim lights and more. There are versions that will accept silencers. And its straight-magazine holds 25 rounds.
For the Stone Soldiers, the UMP offers superior stopping power for light targets, like parahumans. Weight and recoil aren't much of a consideration for the stone soldiers, but as they are trained to be accurate, the reduced cyclic rate is not a factor. Additionally, the .45 ACP round is interchangeable with that used in their Mk23, Mod 0 sidearms.
All in all, an effective weapon, introduced into the series in Book #6, Armageddon Z.
at 1:56 PM No comments: 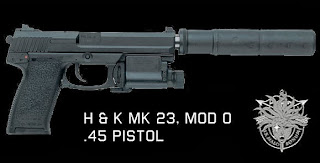 Used by U.S. Special Forces today, the MK23, Mod 0 handgun is a .45 caliber weapon designed for Special Operations use, built by H&K. Based on previous H&K models (the VP 70z, P-9 and P-7) the handgun incorporates a variety of features and precision manufacturing.
The match-grade pistol was adopted by SOCOM in the 1990s and incorporates a laser aiming module and removable suppressor. It also features a twelve-round magazine, expanding the MK 23's ammo capacity to thirteen- a significant inprovement over the M1911's 7+1 (seven round magazine, plus one chambered round).
The pistol features an ambidextrous safety and magazine release, and a decocking lever on the left side of the weapon. The magazine release is larger than some other handguns, to accomodate users' gloves. The pistol is waterproof and corrosion resistant.
The MK 23 further offers excellent accuracy, able to make a 2-inch group at 50 yards. It can also use a wide variety of .45 caliber ammunition, including .45 +P ammo, which packs more punch than a standard .45 ACP round.
In Stone Soldiers, the MK 23 is the back up weapon for most, the main sidearm for others. When used in conjunction with the H&K UMP-45, the Mk23 offers a common ammunition for light targets, such as paranatural humans.
at 3:01 PM No comments:

The Zombies are Coming!

Just in time for Halloween, Stone Soldiers #6, Armageddon Z, will be releasing as a Kindle exclusive! 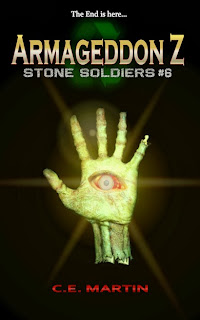 When a psychic who can only see his own future begins experiencing visions of a zombie apocalypse, he sets out to discover the source of the zombie plague and travel back to before it is unleashed on America. Can the Stone Soldiers help prevent the end of the world, or have they finally met an enemy even they cannot stop?
at 10:32 AM No comments: