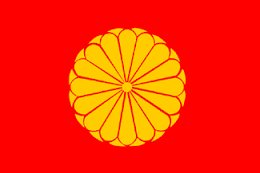 Description:  Warrior-monks of the Japanese Emperor

Long ago, the Empire of Japan was plagued by oni, demons that rampaged throughout the land, terrorizing the people. The Emperor of Japan decided that something must be done, and gathered his most trusted advisers, wisemen and sorcerers.

The Emperor's servants gathered the finest warriors in all the land, training them in the dark arts so that they could  defeat any foe, mortal or supernatural. Of the trainees, seven were chosen and named Senshi Onmyoji, the Warriors of the Garden.

Aided by the sorcerers who trained them, the Warriors set out and quickly defeated and imprisoned all the Oni they could find. Their ethereal prisoners were bound to talismans that the Warriors then took far out to sea, to a secret island-prison constructed at the Emperor's order, to be imprisoned for all eternity.

Their mission complete, the Warriors returned to Japan and resumed their protection of the Emperor and his people from all otherworldly threats, and trained their successors, each Warrior taking on seven disciples to one day replace them.

By the 21st Century, the Warriors of the Garden have evolved, adapting to the changes both in their homeland and around the world. Operating under the name "X-Ray Seven", the Senshi Onmyoji strike at any supernatural threat, while guarding the secret of Jigoku no Shima--the Island of the Damned.

Behind the Scenes
The third book in the Spectral Ops series, Island of the Damned takes place in a remote corner of the Pacific Ocean, on a forgotten island shrouded from sight by ancient magic. Imprisoned on the island are many Oni. For centuries, they have plotted their revenge, awaiting the day someone would be foolish enough to set them free. When that day finally arrives, Detachment 1039 finds new allies in an ancient order of sorcerer-warriors who have secretly served the Chrysanthemum Throne for centuries: The Warriors of the Garden.

Look for Island of the Damned on Kindle, Fall of 2017.