In mythology, elementals were beings or creatures embodying the four believed elements of creation: Earth, Water, Fire and Air. These beings took on a variety of forms in different cultures, including dragons, gnomes, and nymphs to name but a few.

In the Stone Soldiers universe, elementals have been identified by Colonel Kenslir as the First Born offspring of Fallen angels--beings possessing great power, masquerading as gods or manipulating mankind into fearing or worshipping them.

In 1962 Laos, Kenslir met a Kappa--a Japanese water spirit (Stone Soldier). This turtle-like being had an open head, water sloshing around where a brain might normally go. The elemental was actually made of water itself, and could take over a body and transform it into the turtle-like creature. This particular Kappa was bound in service to a Chinese sorceror, which proved its undoing: Kenslir negated the magical energy binding the creature together, disrupting its watery, corporeal form, and killing it.

In 2008, Daniel Smith, the first 21st Century Stone Soldier, encountered a fire elemental in the middle east (Stone Soldiers: Catching Fire). The Colonel identified this particular being as what locals called a Djinn. It appeared to possess a body made of living flame and was under the control of a local insurgent. Again, relying on its own magical energy to sustain it, the Colonel simply cancelled that energy with his own innate abnility to negate etheric (magical) energy, and killed it.

Later in 2008, the first full squad of Stone Soldiers encountered an Air elemental in Nigeria (Stone Soldiers: City of Bones). The First Born this time was pretending to be a witch worshipping the fictional African deity Oya. During their encounter with the elemental, the Stone Soldiers learned it had been bound to a rock by Druids sometime in the past and could not travel far from the rock. Rather than try and disrupt the elemental's energy, Kenslir resorted to conventional weapons--calling in a thermobaric strike on the area around the rock, thereby incinerating the elemental's physical body and presumably killing it.

This third elemental, Oya, was the most dangerous so far encountered, as it not only could control the air it was made of, but also had engineered and enchanted a flesh-eating bacteria it was going to use to eradicate man from the face of the Earth.

Following the events in Nigera, the Stone Soldiers would again be sent to the region,this time to investigate a supernatural threat in the Gulf of Aidan (Stone Soldiers: Sea of Monsters). Again, an alemental--an earth elemental--was identified posing as something else and had to be defeated. This particular elemental also possessed the ability to do more than myth said, turning followers into were-creatures of immense strength and power.

Fast forward to late 2013, when Colonel Kenslir and a new squad of Stone Soldiers narrowly averted the apocalypse (Armageddon Z). This time a nature spirit had created a magically-enhanced fungus that could kill, then reanimate humans, creating a terrifying army of the undead. This particular Elemental was the most powerful to date, able to move from body to body and exhibiting many traits similar to that of a water elemental. Colonel Kenslir barely succeeded in stopping it, and its broken, petrified body was moved to an undisclosed location for storage.

From these five elementals, readers learn that the beings of myth aren't what they always let on, and seem to have a hatred for mankind. They also aren't invincible.

From now through February 18, 2014, get the first three books in the Stone Soldiers series for only $.99 at Smashwords.com using code DF22D 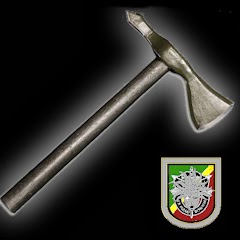 Throughout history, the axe has proven to be one of the greatest tools ever made, combining a cutting edge with the most basic of machines: the lever. Used in combat for millenia, the Axe eventually saw new life in a smaller, handier size: the hatchet, or, as it's called in North America, the Tomahawk.

During the Vietnam War, US Forces turned back to this old, reliable tool, adopting a civilian-made weapon designed by Peter LaGana. Special Forces used these weapons, which featured a cutting edge and a spike that could be used to penetrate more durable targets, like helmets, skulls, or even doors.

In 2001, the US Military again began using the Tomahawk, service members purchasing their own.

Modern Tomahawks often feature metal handles, instead of the wood ones used in the Vietnam era. In Stone Soldiers, Colonel Kenslir, a veteran of the Southeast Asia campaigns, often supplements his twin Bowie knives with a tomahawk, with which he is highly proficient--both in close-quarters combat and as a thrown weapon.

Enjoy the Stone Soldiers series? Spread the word and youcould get a free download...

Here's how it works:

Refer a friend to any of the Stone Soldiers novels (#1 is free).

They download and leave a review (at Kindle, Smashwords,etc).

Your friend emails the author or comments here, giving your email as the referrer and providing a link to the review.

You get a code to download a Stone Soldiers novel from Smashwords.com.

For now, we'll limit this to five referrals per reader, meaning you could get five books in the series for free, just by getting your friends to read (and honestly) review.
at 12:28 PM No comments:

Time for some Renovation

Pardon the mess, but the Stone Soldiers site is a little overdue for some renovating--updating images, adding in some new books etc.

Check back often for new content in the immediate future...
at 12:57 PM No comments: