BOOK OF STONE: The Inferno 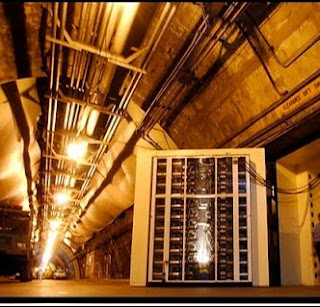 Summary: Certain artifacts and objects are just too dangerous to risk falling into enemy hands. Destruction of these items may have even further disastrous consequences. For this reason, the United States decided long ago that secure storage of these dark items was the only possible solution. Currently, dark objects are placed in long-term, secure storage in a subterranean vault in Nevada, code-named :"The Inferno".

Unlike warehouses or traditional vaults, objects interred at the Inferno are placed in cavities within a poured, hardened concrete vault floor, then encased in a radioactive, gold-particulate concrete to ensure they can not be removed or remain in the hands of human subjects for long.

Presently, the Inferno is home to items dating all the way back to the 1800s, and include both dark objects and beings bound to talismans.


Author's Notes: It's the famous scene from the end of Raiders of the Lost Ark... the Ark of the Covenant has been boxed up and is shipped to a vast warehouse for safe storage--safe meaning away from any one ever monkeying about with it again. The Ark becomes just one of thousands of crates, shuffled away in a remote facility. Later, in Kingdom of the Crystal Skulls showed us just where this vast Warehouse was--Area 51.

For Pale Horseman, I wanted to do something more, but give it that same over-the-top Stone Soldiers spin. A secure storage area where it wasn't just unlikely anyone would ever see Charon's staff again, but that no one could see it--for long anyways.

Enter the Inferno, a former underground nuclear test site turned into a radioactive vault. I imagined it as part Ang Lee's Army Bunker from the Hulk movie, part Warehouse 13. A hidden, ultra-secure site that I could permanently send things I didn't want to ever bring back to the series. Of course, it is fiction, and anything's possible...