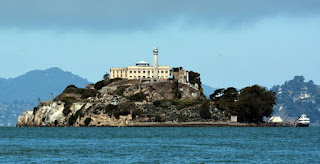 Located in San Francisco Bay, Alcatraz Island has been home to soldiers and criminals. In our world, the prison was closed on March 2, 1963 by Attorney General Robert Kennedy. Today, it stands as a landmark and tourist attraction.

In the Stone Soldiers' universe however, the prison was not closed. John F. Kennedy wasn't assassinated and the world was a very different place by 1963. When America began incarcerating the growing number of parahumans and mages, the facility found new use as the ultimate prison for the supernaturally-dangerous.

In addition to its natural barriers against escape, the prison also relied heavily on pharmaceutical containment of its high-powered inmates, keeping the population drugged and docile. In 1974, this was bolstered by an unexpected addition to the inmate population: Laura Olson, a vampire recruited by Detachment 1039 to assist in locating undead cells around the world through an empathic bond with her own kind.

Under careful surveillance, Olson was allowed to serve her residency on the medical staff, feeding on the inmate population not only to sustain herself but to ensure none of the prisoners could manage any uprising or escape.

In 2013, the prison was assaulted by an outside supernatural force--the antediluvian shapeshifter Tezcahtlip, who murdered the entire inmate population and staff and attempted to do the same to the vampire MD.

Fortunately, Olson survived thanks to her undead powers and joined Detachment 1039 in pursuing the shapeshifter to Mexico where it was posing a the Aztec god Kukulcan.

Behind the Scenes
Alcatraz has not been featured in any further books. It is entirely possible the prison was re-staffed and new inmates slowly brought in. Lore tells us vampires nor ghosts can't cross running water, so it seems a fitting location to lock up supernatural beings.