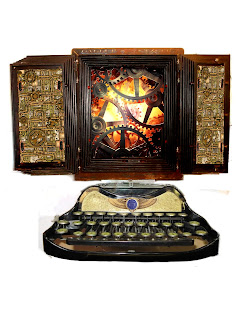 Summary:
Built by the First Born Fell, Thoth, FIVE was a near-sentient machine designed to mimic human thought process, creativity, and personality for the purpose of decryption--of the stars. An electro-mechanical machine filling a subterranean cavern beneath Sydney Australia, powered by energies of imprisoned spirits and maintained by a veritable army of demonic creatures, FIVE operated for centuries, building its knowledge and personality simulation and uploading the sum total of human and Fell knowledge. In the 1800s, Five was at last connected to an observatory telescope and began its observations of the heavens to decode the pattern mentioned in the Bible; e.g. Genesis 1:14

In the early 1980s, not satisfied with the pace Five's electromechanical components provided, Thoth connected the machine to modern human solid state computers and the fledgling internet. The purpose of this upgrade was to enhance Five's processing speed and ability to gather knowledge, but it also gave the machine the ability to summon assistance.

At some point during Five's lifespan, the machine determined that it's purpose was evil. The machine created a virtual reality simulacrum of its workings and enacted a plan to reveal Thoth's underground base to humanity so that Five could be destroyed before it's mission was completed.

Detachment 1039 answered the machine's plea for help, transmitted as extreme low frequency signal through the Earth's crust, and killed Thoth and his demons. Before the machine self-destructed, it then transferred its simulacrum program and the core elements of its consciousness simulation to America's MAXIM decryption network.

Behind the Scenes:
While the idea of an ancient Egyptian God secretly living beneath Sydney may sound strange, there are actual sites in Australia which some claim hold remnant evidence of Egyptian visitation.

Author's Notes:
The A.I. turning against its masters is a well-used trope in science fiction. HAL 9000 is my personal favorite. Asked to lie to conceal the true mission of the Discovery from the crew, the super computer goes kind of insane and begins killing the crew. Before that though, he seemed like a swell digital dude.

MAX, the secret super computer, has been in nearly all the Stone Soldiers books--just very well hidden. In a fleeting glimpse of an alternate future (Armageddon Z) readers finally learned that the mysterious Max was indeed a machine. But where did he come from?

The idea for Max's origins came from simple word play... instead of a super computer, I thought a supernatural computer might seem better. To help me decide, I watched the incredibly gorey 13 Ghosts (2001) about a machine powered by trapped, evil spirits. It told me I was on the right track, but I needed something more.

About the same time, I read an article about an actual AI conversing with its programmers. Something about the no-nonsense, matter-of-fact way it described things got me thinking... if God is real (the basis for this series) wouldn't a machine with all the data available to it come to the same conclusion? There wouldn't be a need for faith--a machine operates on cold, hard facts. Throw in that a demon built the thing, and you have a perfect recipe for an A.I. that doesn't doubt a Creator and who may just reach the conclusion its very existence is wrong.

Of course, a steampunkish, prehistoric, mechanical computer that would have given Babbage nightmares is too big to take back to Florida, so I had my second stroke of uniqueness for Max... a 3D virtual rendering of FIVE, performing the same function as the mechanical one under Sydney--simulate a human being's mind.

Max was born--at the cost of Five's life.