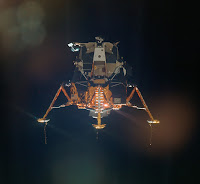 Last Known Status: Abandoned on the Far Side of the Moon.

Summary:
Built to land on the Moon as part of the Apollo space program, LEMs weremeant to ferry two astronauts from orbit to the surface. Six LEMs successfully landed on the Moon, while a seventh, from Apollo 13, instead served as an emergency source of life support to enable the astronauts to return to Earth safely.

While Apollo 17 was the last mission to travel to the Moon, originally twenty missions were planned and fifteen LEMs constructed. Of the three remaining LEMs, LM 15 and 16 were transferred to museums, while LM 17 was reportedly scrapped.

In 2015, Project Flare completed construction of the Sprocket, an immense Gateway Portal capable of transporting troops and equipment off-world. As the US Military had quietly been watching the Huldufolk bases on the far side of the Moon, a plan was quickly formulated to land the Stone Soldiers of Detachment 1039 on the satellite. Rather than risk opening a portal to Earth, it was decided that the Sprocket would create a portal in Lunar orbit and landing craft would then be dropped from Groom Lake to the surface of the Moon, safely transporting strike teams.

As it turned out, LM 17 had not been scrapped but was actually in storage at Groom Lake's Advanced Aircraft Design and Development facilities. LM 15 and 16 were quietly replaced with modern mockups, and the surviving three LEMs were quickly retrofitted for portal deployment.

As the Apollo program had started a tradition of naming the LEMs, Project Flare also decided on names, rather than numerical designations and the names Grissom, Chaffee, and White were chosen in honor of the three man crew of Apollo 1 that perished on the launchpad in 1967.

Both Landers were left on the Moon at mission's completion, the teams traversing back to Earth through portals opened directly on the Lunar surface.

Author's Notes:
Aliens on the Moon--the Syfy special really grabbed my attention and my imagination. I was already a big fan of aliens on the Moon movies: Moon Trap and Apollo 18. And I'd seen all sorts of websites proposing the idea that aliens were in fact demonic beings carrying on the same abductions they had in the middle ages, trading in their Goblin personas for Little Gray Men. One Dark Step was born.