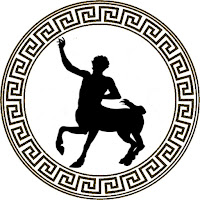 A prehistoric man in ancient Greece, Equus was cursed by Zeus and transformed into a Centaur. He roamed the Earth, immortal, for centuries, until he finally challenged the riverman, Charon, in hopes of dying. Instead, Charon possessed Equus and used his body until the modern era, killing innocents  to reap their souls, which were imprisoned in his dark weapon, a dark object that could assume multiple shapes. Equus was finally put to rest in 2014, SS09: Pale Horseman.

Equus-Charon marks the first instance where a true Centaur appeared in the Stone Soldiers universe. In Greek mythology,  Centaurus was the father of all centaurs (also called Ixionidae). Half-man, half horse, with the torso of a man extending where the neck of a horse should be, Centaurs were said to be wild, savage, and lustful. But the man who would become Centaurus was not born a hybrid--he was cursed by the First Born Fell, Zeus.

Centaurus himself was the son of the cloud-being Nephele and the cursed Greek man Ixion--a hideous being who fled from humanity and allegedly mated with the horses of Mount Pelion.

Most historians believe that the mythology of Centaurs actually arises from the advent of horsemen in ancient times--that those who hadn't learned to master riding equines were terrified to see their new enemy approach and created the myth.

For Stone Soldiers, the Pale Horseman is a blending of the Grim Reaper and Centaur myths with the Horsemen prophecy of the Book of Revelations.

The nephilim/demon Charon further allowed for the final step in the Josie Winters story arc of the Stone Soldiers series. Possessing Josie, Charon used her body, unlocking her full psychic abilities to reap more souls--which, stored in his dark weapon, provided him a nearly limitless power source. After defeating Charon, Winters retained the memory of how to use all her psychic powers. This was foreshadowed in Stone Soldiers #5, Black Knight Down, when Jimmy Kane was also possessed by a witch who inadvertently showed him how to trigger, and control, the werewolf curse he carried, allowing Kane to become werewolf whenever he chooses.