A demon (First Born Fell, or nephilim) from prehistoric times, Charon roamed the Earth for millennia, killing innocents and imprisoning their spirits in his enchanted/dark weapon. Charon moved from the body of champion to champion, always looking for new abilities and powers. As such, he could shapechange into any previous form at will. In 2014, Charon was using the body of the centaur Equus and came to America (SS09: Pale Horseman). He eventually, briefly, possessed Josie Winters before being pulled from her body and bound to his staff once more without a host.

For ages, Charon's staff-weapon was his prison. He is anchored to it, and never able  to move more than a  few feet away from it. In a mortal body--gained when someone touches the staff--Charon had the full range of his powers. Without a body, he is limited and ethereal--tied to the staff and only able to move, as an non-corporeal being, a short distance from it. Charon was able to break free of his staff weapon when it was broken by Mark Kenslir, who misunderstood the weapons purpose and used his own powers to negate the binding magic of the staff. Charon was eventually rebound to the staff by Detachment 1039, and the ancient, arcane artifact was buried in the Inferno vault in Nevada. 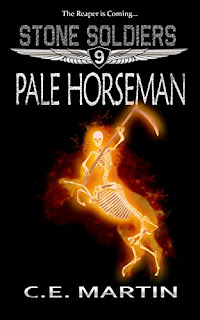