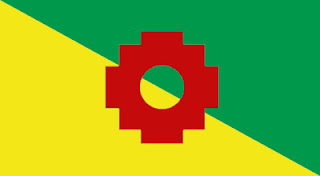 The tiny rainforest nation of Acre lies in the center of South America, bordered by Brazil to the east, Peru to the west, and Bolivia to the southeast. Since the nineteenth century, the small nation has been the territory of all three larger nations and is today still unrecognized by its neighbors.

After decades of conflict, in 1909, a treaty was signed and the territory was made part of the nation of Brazil. In 1980, Acre declared its independence and successfully repelled Brazilian armed forces sent to quell the latest uprising. Today, Acre remains a contested region, but somehow manages to avoid being invaded by occupational forces from any other nation. The borders of the tiny country are heavily patrolled and despite its small size, Acre’s semi-organized militia forces have eliminated all smuggling into or out of the country.

Rumors from the Amazon region abound that Acre is controlled by shamans given power by a supernatural entity that claim is none other than the Incan god Inti. Successful drug and rubber plantations within the borders of Acre have secured significant financial reserves for the country and it is generally accepted the tiny nation preserves its unrecognized-yet-sovereign status through bribes and financial manipulation of its surrounding nations.

Several financial and economic experts in academia have pointed out the drug and rubber trade of the late 20th Century—the former eradicated by combined United States and Bolivian armed forces—could not account for the tremendous wealth of the tiny nation. This has led to further speculation that the long-lost treasure of the Incan Empire was hidden in Acre and is now used by the rebel government there to preserve the peace. As virtually no outsider journeying into Acre ever returns, the true nature of the country officially remains a mystery.

Look for Acre in Dark Powder, Shadow Detachment #9, releasing the Summer of 2018.