ABOUT THE BOOK: Brothers in Stone (Stone Soldiers #2) 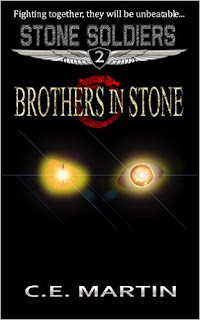 Colonel Mark Kenslir, a cold warrior cursed to live forever, is rebuilding his team of stone soldiers after a campaign to stop a rampaging shapeshifter in the American southwest. But word soon arrives that someone, or something, is again on the loose, ripping out and consuming human hearts to steal the memories and forms of civilians.

Kenslir enlists the help of one brave teen and an FBI postcognitive empath to track down the new killer--only to discover there are now two prehistoric shapeshifters loose in the modern world.

Falling back to their headquarters to regroup and replenish their numbers, the Detachment soon find themselves under assault from the ravenous shapeshifters--who are intent on pillaging the military's greatest supernatural treasures.

Can a new generation of stone soldiers and a girl struggling to understand her new cryokinetic abilities turn the tide of battle, or will Colonel Kenslir die at the hands of a shapeshifter again?

Just a few short months after Mythical's debut, the story of the Stone Soldiers continued, in the form of Brothers in Stone, a story about a new generation of men turned into living stone soldiers. But of course, if you are going to resurrect one of the good guys killed in book 1, you have to bring back a bad guy, or two...


Like many of the titles in the Stone Soldiers series, Brothers in Stone follows a pattern of almost satirical similarities to more series war stories. Brothers in Arms is both the title to a popular series of war-based First-Person shoot video games and a militaryish term for the bond between soldiers who have fought together. In the case of Book 2, it served a wonderful double meaning, describing both Jimmy Kane's induction into the ranks of Stone, as well as the pre-historic villain Ketzkahtel's own brother, Tezcahtlip, who has also been bound in a stone sarcophagus for millennia.


Where Mythical followed a theme of past meets present, Brothers is more related to "United We Stand", showing the importance of team work as teens Jimmy and Josie are joined by FBI agent Pam Keegan and her charge, Victor Hornbeck, a psychic who sees visions of the past when he touches physical objects.


Unlike Mythical, Brothers was intended as a novel from the get-go. That meant much better story-telling, in a longer format. It also meant I got to re-tell Book 1, basically redoing my earlier work from a slightly different angle, then adding on to it.

A fan of Lance Henricksen's amazing X-Files spin-off, Millenium, I definitely wanted to work in a postcognitive empath. I also liked the contrast... a man who relies on touch being turned to living stone, where his sense of touch would be greatly diminished.


And instead of going the full-artner route, I liked the way NBC's Heroes did it, pairing human with parahuman. Very similar to Asimov's I Robot series with a human and android cop paired up.


As for Agent Keegan... originally, I saw her as a rival for Josie Winters. An older version of the girl with a definite Lucy Lawless vibe going on. But the more I thought about it, I liked that idea of contrast. Afterall, Stone Soldiers is the ultimate in contrast, with good vs evil in every book. Keegan would be no different.


Short, blonde, older, and clearly of loose morals, Pam Keegan was a James Bond-type agent who would be better off in a 1970s novel or The Destroyer series. I greatly enjoyed writing the character, laughing at my own parody of that particular kind of femme fatale. Alas, nearly a dozen books later, I question the decision. Pam isn't very family-friendly, nor does she fit in well with the overall theme of the series. As such, she's taken a very big back seat to most action, serving as a Liason with the FBI that barely appears in many of the stories.


Victor on the other hand, wasn't so much of a contrast. He was basically an older version of Jimmy, but with powers. Of course, both young men get turned to living stone, becoming Brothers in Stone, but Victor ended up being a lot of fun to write, and I decided to keep him as a regular in the series. Having a detective who doesn't search for clues but rather sees them in visions, makes solving mysteries a lot easier. Which is great, as I prefer to write action.


Cryokinesis seemed like the perfect power for Josie Winters after her injection with Nephilim DNA. Unlike Drew Barrymore's Firestarter character, Josie Winters is reserved, almost cold-personality individual, and having the ability to freeze an enemy in their tracks really appealed to me. And this was before Elsa and her little sister became the next big Disney animated stars...

And of course, there were the first inklings of something inhuman in Argo Tower. An Artificial Intelligence I had planned from the start but didn't want to throw in right away...


Finally, I have to mention Medusa. If you're a follower of mythology, you know Perseus used Medusa's reflection to turn her head to stone, then cut it off. It still possessed the power to petrify, but it was stone. How then did the U.S. Military remove one eye to create the stone soldiers? Book 2 showed us, with a glimpse of the flesh-and-blood Medusa after her rebirth in the Fountain of Youth. Makes you wonder how many times that scenario has played out...


NEXT UP:
BLOOD AND STONE (Stone Soldiers #3)