ABOUT THE BOOK: Blood and Stone (Stone Soldiers #3) 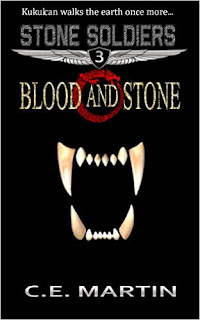 The shapeshifting giant Tezcahtlip is free in the modern world, eating the hearts of victims to steal their form, their memories and their power.

After losing his brother in a battle with the American military, the giant flees to Mexico, taking up residence in the Yucatan where he poses as the Mayan god Kukulcan in an effort to gather followers and sacrifices.

The men and women of Detachment 1039 will need help from an unlikely source before they head south to combat the monster. But can a vampire imprisoned at Alcatraz really be a help, or a hindrance?

This was it, the one where I hit my stride and figured out how I wanted the series to go. And it was the first appearance of what has become my favorite character--Laura Olson, the saucy vampire who I fear my subconscious based on Alex Kingston's amazing portrayal on the BBC's River Song.

Interestingly, back when I first wrote Mythical as a screenplay, I had wanted to do a story about Super Vampires vs Super Soldiers. I switched to Super shapeshifters instead, feeling there was too much sparkling undead magic on the market. But by November 2012, I was unleashing my own version of the undead, and going for a very Heroes-like villain: A heart-eating shapeshifter intent on becoming godlike by stealing the powers of as many parahumans as possible.

As planning went on, I knew I needed to add some more characters. I had only three stone soldiers at that point: Jimmy, Victor and the resurrected Alpha Stone Soldier, Daniel Smith. Instead of another recruit, I decided to go back to my original idea from the 1980s of an elite team of supersoldiers fighting covert battles around the world. Enter Chadwick Phillips, electrokinetic.

Blood and Stone is all about rebirth. I'm not sure I planned it that way, but it's a recurring theme... Tezcahtlip, surviving the events of Book 2 is reborn into the sum total of he and his dead brother, having consumed the frozen heart of Ketzkahtel. Realizing that America isn't a good place to start his new empire, Tezcahtlip flees south, intent on rebuilding a slave population by posing as the blood god Kukulcan. First though, he needed a pick me up.

Way back in X-Ponent, I had incorporated a super prison for the parahumans of Mark Kenslir's universe. Now that I had made the  original Stone Soldier a supernatural being, I decided that would still work, as many a ghost and vampire story claimed that neither could cross running water. An island prison sounded pretty cool.

Enter the alternate reality universe of Mythical, where Alcatraz is a maximum security holding place for those caught practicing the black arts or using their psychic abilities for evil end up. But how do you keep such a population in check? Marvel Comics had neutralizers and mutant cures, but I needed something fresher.

There have to be vampires in the Mythical universe. You can't have supernatural and not have the undead. So a vampire kept under lock and key, providing empathic surveillance on her brethren in exchange for life seemed pretty interesting. Throw in that she keeps the prison population in check by feeding on them... I liked it. Very Gitmo.

And poor Mark Kenslir, who wanted nothing to do with the overly-fresh Pam Keegan is forced to reunite with his old flame, the overly-amorous, red-headed vampire M.D. Giving me a chance to this time mock the sexed-up nature of vampire fiction today.

Of course, as the series has progressed, we've seen Laura Olson get her act together and become a bit more restrained. Possibly from having a classier source of sustenance...

BEHIND THE SCENES
Why a red head? Well, we already had a brunette (Josie) and a blonde (Pam). Why not go Charlie's Angels and throw in a redhead for good measure. Clearly the last thing Mark Kenslir wants is to have to be around three women in the field. Even if one is sort of his granddaughter, it's still got to be disconcerting for an early-20th Century soldier...

As always, the names of the deceased were rough to come by for this one. Thankfully, I know a lot of people, and enjoyed using their names for the victims of this tale. From a prison guard to a modified bomber's pilot, I put aside the phone book I normally use to randomly pick names and had some fun creating parodies of those I know.

And remember that plot I had wanted to do before, with super-vampires? Well, it wasn't just Laura Olson I decided on. I liked the idea of Tezcahtlip being able to create his own undead Army, but eating a vampire's heart.

Why Mexico? Many a culture has believed eating the heart of your enemy gives you their strength. But Mexico had multiple cultures that built pyramids for the slaughter of innocents. In a reap-what-you-sow kind of way, I thought it only fitting a creature who actually does steal your memories, powers and lifeforce by consuming your heart would want to head there. Originally, I had wanted to unleash Tezcahtlip on the cartels, but in the end the outline was getting too big, and I left the full gruesome details of the shapeshifter's reign of terror up to the reader's imagination.

As a fitting end to a trilogy, Book 3 ended with Mark Kenslir's death, again, and a hint of another impending birth. That was originally so I could put this series aside and return to it much later. Alas, the ideas for more installments wouldn't stop and in 2013, I had to continue the Dark War with more Stone adventures. I guess that means leaving this trilogy open-ended was a good idea after all...

Interestingly, I hadn't planned on how to kill Tezcahtlip on this one. I was eager to start writing, and abandoned my outlining a little early. It was only sheer, dumb luck that I came up with the idea of electrocuting the would-be-deity. Had I chose for Chad Phillips to possess a different power, I'm not sure the ending would have turned out...

I also took a few pages from The Destroyer for this one, parodying real-world celebrities and laying the groundwork for villains I could bring back years from now.

NEXT UP:
SHADES OF WAR (Stone Soldiers #4)