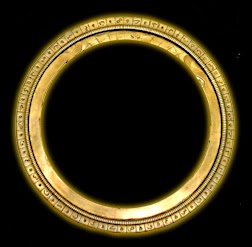 In 2013, Detachment 1039 discovered a Ring Portal in Greece, deep within Mount Olympus. A golden metal ring, nearly nine feet in diameter, the device was activated by the Titans that had been in a state of suspended animation in the Black Knight satellite. According to Father Lee Schuler (Hercules) the portal allowed travel to and from the home of the Olympian "gods"--on Mars (Black Knight Down).

Some short time later, the Detachment again located an ancient Ring Portal, this time at the South Pole. Hidden deep beneath the ice in the remains of some kind of antediluvian city discovered by the Nazis in the mid-Twentieth Century, this Ring Portal had been altered by German scientists, and was capable of opening a point anywhere on Earth by connecting with the blood of a target in some kind of ancient dark magic. This portal, and the base it was located within, was seized by U.S. operatives and continues to be investigated (Seven Deadly Sons).

No one yet knows who built the Rings. Early research indicates they are powered either by etheric or lifeforce energy, and are normally linked in pairs, each Ring acting as the ends of the passageway between points. Transit between portals in instantaneous, suggesting they may create a kind of hyperspace bridge. The portals themselves have no moving parts (although the Ring in Greece was observed to be spinning and rotating on its own as it formed a connection to its counterpart on Mars). They appear to be massive constructs of metal, etched with symbols from long-lost languages. The opening in the middle of the Portals, through which transit is made, generally measures nine feet across, plus or minus a few inches. The variance in etchings and inner diameter suggests construction at different times in prehistory or by different builders.

When activated, a Portal creates a blinding white light in its center, which spreads out, forming a glowing disk. Once stabilized, this light fades and reveals what lays at the other end, much like an open doorway. Transit can be made during the initial connection of Ring Portals, prior to stabilization.

Passing through a Ring Portal does not appear to have any physiological side effects. Once connected, the passage created by a set of rings appears to be stable and no longer requires energy to maintain itself. The connection between activated Rings can be broken by the disruption of the energy creating the connection during the first few moments Rings are linked, or by destruction of the portals themselves--which appear to be made of unknown, durable alloys consisting primarily of gold, silver and platinum.

The implications of such instantaneous transit is frightening. Troops or even warheads could be sent to locations around the globe, throughout the solar system, or even further, bypassing detection or traditional defenses. Initial theories suggest that the Portals' ability to connect with one another is limited only by the energy required to form the connection--suggesting any distance could be bridged under the right circumstances.

Most alarming however, are the number of portals found in recent times. Given the rarity of the devices, and considering how long they remained hidden from mortal eyes, it is extremely suspicious so many have been activated within such a short period of time. While some have called this coincidence, there is a growing concern that the portals are being activated for some ulterior motive not yet revealed.


Enjoy the Stone Soldiers series? Consider supporting it at Indiegogo, or by spreading the word!
at 1:24 PM