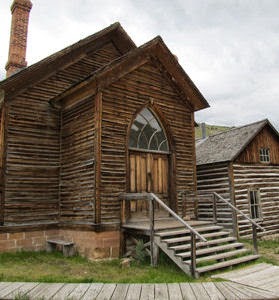 Hidden in a remote corner of Montana, this small, unassuming one-street town is actually a classified U.S. DoD retreat. Originally constructed in the 1950s for members of various bloack projects to meet and strategize, the town is completely inaccessible, save by air.

Construction first centered around a short runway, which later would become the town's single road. At one end lies a fortified, concrete bunker complex disguised as the town hall, leading down into an underground complex. The other end of the street is  large concrete parking area used for helicopter landing.

Along the sides of the main street, buildings were constructed, creating the illusion of a small town. No structure is higher than two stories and some are in fact disguised garages and warehouses for equipment.

In 2014, after successful testing at Fox Island, Project Medusa began moving de-petrified subjects to the site, renaming the town Resurrection. New arrivals are slowly introduced to modern technology, residing in the 1950s-styled town until they have successfully passed psychological screening are and ready to return to the general population.

Very few individuals know of the site's location, and access to it is heavily restricted and monitored by Detachment 1039 and Project Ghostwind.