For April, Stone Soldiers.info is celebrating the A to Z Blog Challenge with daily letter-themed entries. A separate page with a list of all these entries, plus Character Profiles and Book Synopses will appear on the right hand side of the page in coming weeks, detailing the people, places and things of the Stone Soldiers universe. 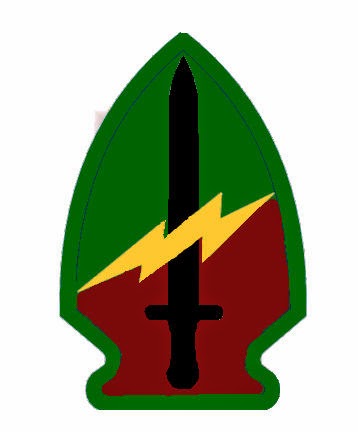 The US Military’s Joint Service, anti-supernatural force, Detachment 1039, unofficially called the Black Sabers, was the brainchild of General Frank Merrill, following his experiences in World War II Burma. Comprised of "gifted" soldiers trained how to respond to supernatural and mystic threats, the unit has operated for decades in secrecy, eventually becoming a Joint Service unit falling under the direct control of the Joint Chiefs of Staff.

Based at a clandestine facility adjacent to Homestead Air Force Base, Miami, FL, the unit responds to supernatural and paranormal threats worldwide, operating under strict Rules of Engagement. During the Carter administration, the Detachment was downgraded to an advisory capacity only, with no operations conducted in the field. In 1981, the Reagan administration reversed this, but directed that field operations be in support of SOCOM forces. When Project Medusa succeeded in the early 21st Century in creating super soldiers, the Det. was re-tasked with responding directly to threats instead of supporting standard special operatons or unconventional warfare forces.

The Det. got the name “Black Sabers” during the command of General B.A. Black, who later retired in 1999. The unit designation is not formally used in any form. The numerical designation, 1039, was chosen at random.
at 9:00 AM