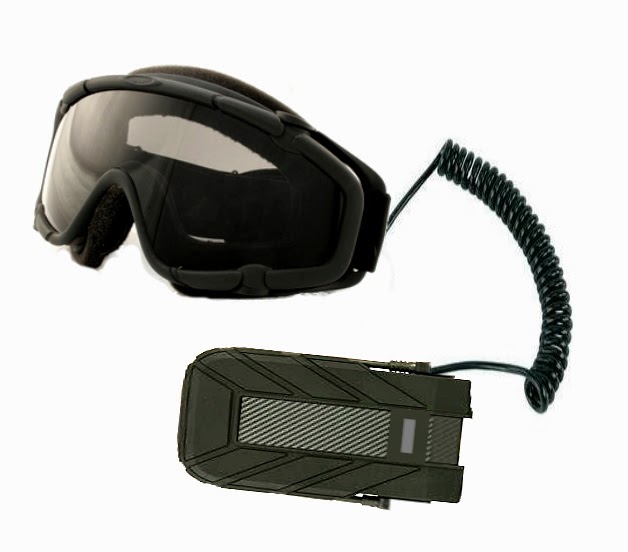 
One of the most important pieces of equipment in the Stone Soldiers arsenal is also their most powerful: the Tactical Targeting Visor. Consisting of a head-up graphical display and head-mounted camera system, coupled with a telemitter, the device allows members of Detachment 1039 to receive real-time information from their command center in Miami, as well as allowing the command center to see what every deployed Stone Soldiers sees.

In 2003, the United States Army called for a modernized warrior, the Future Force Warrior, to provide soldiers in the field a technological advantage over their enemies. Unknown by most of those involved in the project, the much of the technology used in the FFA had already been constructed as prototypes and tested by Detachment 1039.

The modern HUD Tactical Goggle system combines variable-spectrum, micro-CCD cameras with microphones, speakers and cybernetic feedback sensors in a waterproof package that creates an augmented reality view of the world for the wearer. High resolution lenses can display any amount of data required by a soldier in the field. Hands free interaction is achieved by monitoring the eyes of the wearer, creating an optical mouse that is triggered by feedback from sensors around the rim of the goggles. (NOTE: A smaller, tactical glasses version of the HUD system has been issued to the Detachment for operations in urban environments where the wearing of full tactical goggles would be suspicious). The HUD component of the TTV is connected to its external telemitter by means of a fiberoptic cable.

Audio and visual displays are only half of the TTV system. In the 1970s, it was decided a non-electromagnetic means of communication was needed for agents operating deep within enemy territory, where transmissions could be monitored or blocked. The telemitter was developed in answer to this need.

Using matched cuttings from the cloned brain tissue of a telepath, telemitters share data across any distance, instantaneously by means of the empathic resonance effect, similar to the Twin Effect reported in human twins. In essence, cellular tissue is stimulated electrically, its cuttings sensing this stimulation and responding. Frozen in liquid nitrogen, these tiny pieces of artificial tissue can transmit data back and forth.

In 2013, it was discovered that stimulation of a tissue cutting also produces a feedback that can be detected by telepathic and empathic creatures--allowing them to mentally "hear" a telemitter in use. Otherwise, telemitters operate in complete secrecy, undetected and unblocked by any conventional means.

Modern telemitter units are slightly larger than the average smartphone, encased in a durable, waterproof shell, and contain micro computers, GPS sensors and a multifrequency transmitter and receiver that operate on conventional electromagnetic frequencies. External connectors allow a telemitter to be connected to standard electronics, such as computers or conventional radio trasnmitters.

The TTV system has been in use by Detachment 1039 since the early 1990s, but has grown in complexity and function, while shrinking in size. By 2014, telemitters have been assigned to the Detachment that resemble traditional smartphones for use in urban settings.

All TTV systems are equipped with a self-destruct charge that will incinerate the tissue cutting, preventing unauthorized access of America's most secure means of communications.

Enjoy the Stone Soldiers series? Consider supporting it at Indiegogo, or by spreading the word!
at 1:17 PM