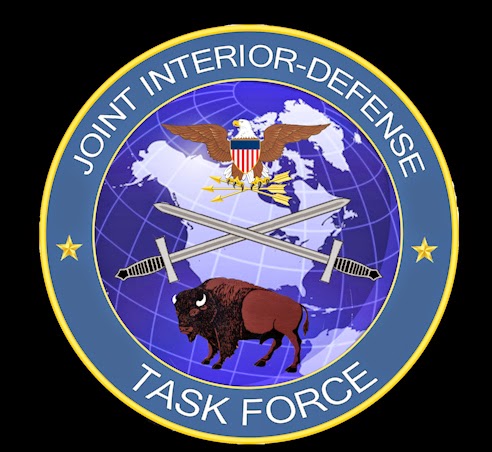 
Detachment 1039 is tasked with protecting America from the supernatural and the paranormal. But doing so within the borders of the U.S. can be difficult, due to something called posse comitatus.

The Posse Comitatus Act was passed on June 18, 1878, and basically forbade Federal Armed Forces from acting in a law enforcement capacity within the United States. This Act has been modified over the years, allowing Armed Forces to be used in certain conditions. But overall, it would be questionable for the Army to show up in response to a supernatural serial killer and not the FBI.

The solution for Det. 1039 was to create a Law Enforcement Agency under which the Detachment could covertly work. Enter the JIDTF (“Jid-Tiff”)

Operating as Special Agents for the Department of Defense and Department of the Interior Offices of the Inspector General, Det. members are “assigned” to the Joint Task Force, yet possess Federal Law Enforcement Officer authority anywhere within the United States.

Officially, the JIDTF exists to coordinate DoD resources in support of the Department of the Interior—for example, air support for search and rescue or firefighting missions. Or the use of Bureau of Land Management lands or National Parks for Armed Forces training exercises.

Posing as agents of the Inspector Generals for the two Departments, the Detachment can respond to any portion of the U.S. offering an explanation that they are looking for misappropriated Government property, abuses of Government land or even an investigation of wildlife related matters. For example, in Book 8, Terrorcota, the team tells local authorities they are investigating the impact of a fireworks display on the fish in a river system, when actually they are searching for alchemical weapons concealed within the fireworks.

The JIDTF also has Agents and support personnel assigned from other US Departments, for example Special Agent Pam Keegan of the FBI, who is designated the Department of Justice Liason for the Task Force.

JIDTF is based in Miami, FL, at Argon Tower, on the premise that their primary area of concern is the patrolling of National Lands in the Florida Everglades by military aircraft and the use of the Everglades for training exercises.