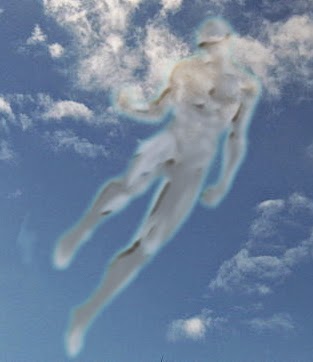 
In a world with psychics and sorcerers, it is inevitable that the military aren't the only ones using the supernatural and the paranormal for spying. In Stone Soldiers the ultimate spies are the NSA's Ghost Walkers, astrally projecting operatives able to leave their bodies behind and travel unseen around the globe.

Leaving behind their physical bodies, Ghost Walkers exist on two planes of existence at once--the physical world and the astral plane. Lacking a physical body, Ghost Walkers rely on psychic senses to see the world around them. A world that looks very different from our own. No sunlight penetrates the astral plane of the Ghost Walkers. Instead, what they sense as light is energy--either the lifeforce of the living or the etheric energy of magical people, places or things.

Ghost Walkers travel at the speed of thought, limited only by their self-control or willpower. Most prefer to employ a kind of flight, soaring as high as they dare. Navigation is tricky on the Astral plane. Walkers must rely on landmarks to steer them to their destinations. Returning to their bodies is far easier, taking place nearly instantaneously.

Rather than wait for a Walker to return to their flesh-and-blood body to report on what they've seen, they are paired with telepathic handlers--agents who monitor the Walkers in real time, reading their physical minds, to which they somehow remain tethered. Some telepaths are even able to link a third person to the Walker, so that they experience what the Walker senses.

Walkers can penetrate any physical obstacle, passing through walls and fortifications with ease. They remain invisible to most, but can be seen as faint, ghost-like outlines to those with even the slightest of psychic ability. Walkers remain immaterial to most, but can be interacted with when sufficient etheric energy is present.

To protect their identity, Walkers are given code-names upon entry into the Ghost Walker program. Women are typically named for flowers, such as Daisy or Iris. Men are given other plant-like designations, such as Forrest.

When a Walker works in tandem with troops on the ground, they rely on sign language to communicate--those on the astral plane cannot interact telepathically, or speak, as their physical bodies are often thousands of miles away.

While Ghost Walkers remain immaterial to most, there have been fatalities. In 2013, Ghost Walker Daisy was killed while scouting a location in Mexico (Blood and Stone). A powerful magic-user there was able to physically restrain Daisy, and choked her astral form until her physical body, suffering some kind of negative feedback, or perhaps suffering from shock, died.

While the series has only revealed United States Ghost Walkers thus far, it is safe to assume that astral projection is not a uniquely American ability. Other nations or organizations may possess the same abilities.
at 12:41 PM