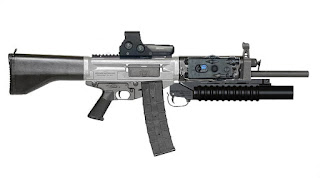 Summary:  A gas-operated, selective fire combat shotgun, the USAS-12 a South Korean-made weapon, based on the Atchisson Assault Shotgun, first developed in 1972. The rifle fires .12 gauge rounds, held in either 10 round magazines or 20 round drum magazines. The USAS-12 has an effective range of 40m, and weighs a little over 6kg, thanks to a number of polymer parts.

Capable of firing variable types of .12 guage ammunition, the USAS-12 is Mark Kenslir's preferred long arm for combating supernatural threats. Customized with an underbarrel M203 40mm grenade launcher, the rifle has served him well in a number of encounters.

Author's Notes: Equipping a supersoldier with the appropriate firearm is a challenging task. Over the four years the Stone Soldiers series had progressed, a number of weapons have come up in my research. the USAS-12 seems to be the most versatile, given its use of .12 gauge ammunition. Kenslir has fired flechettes, White-Phosphorous and even silver buckshot.