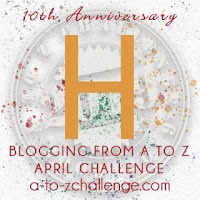 HAINT BLUE, AND OTHER COLORFUL SUPERSTITIONS

If you’ve ever been to the American South—particularly, the Carolinas—you might have noticed a lot of white houses with a kind of sky-blue door or porch. I never paid this much mind, assuming the light blue just went well with the other bright colors. But recently, while researching alternative names for ghosts & spirits, I stumbled across Haint Blue.

Haint blue is a color—that light, sky-blue (as I call it) color I just mentioned. It is an official color, which is even carried by Sherwin Williams on their website.

Sherwin Williams even explains the origins of the color: how Southern superstition holds that ghsts, or haints as they are sometimes called in the region, are repelled by the color, mistaking it for water, which ghosts are believed to not be able to cross.

I was rather shocked to learn this. I’d never heard about a color repelling spirits. I’d heard how many believe sage does the same thing. And then there’s the Old Testament story of Passover, where the Jews in Egypt marked their doorways with lamb’s blood, protecting them from God’s wrath when a Heavenly Host descended and unleashed some vengeance on the land. But a bucket of latex keeping ghosts at bay? Can ghosts even see colors? Do they even “see” in the conventional sense—they don’t have eyeballs. How do we know they don’t use some kind of sixth sense to navigate the world?

I set out to find any other colorful superstitions. There are lots of meanings and symbolism behind colors, but repelling anything? A few websites mention an old belief that the color red could repel witches: drawing a red line around a barn to keep a witch out (the Pennsylvania Dutch), tying a charm in a red cloth hung from the neck protects from bewitchment (Bohemia), braided red ropes of cords hung in barns compel a witch to stop and count the threads before harming any animals… there are a variety of uses of the color red.

Okay, so if blue is the only color that repels spirits, why? Is the color itself special? Maybe it is, if one believes that until modern times, humans couldn’t even see the color.

According to 1800s scholar William Gladstone, Homer never used the word “blue” to describe the ocean in the Odyssey, instead referring to it as "wine-dark" or other hues. Lazarus Geiger also propounded this belief, noting that the word for the color blue never appears in Icelandic, Hindu, Chinese, Arabic, and Hebrew texts. Etymologists claim that the first use of a word for blue came from the Egyptians, who also, coincidentally, were the only culture able to produce blue dyes.

It might seem a stretch to believe that blue hasn’t always been around. But, in 2006, Jules Davidoff, a psychologist from Goldsmiths University of London, published a study detailing work he did with the Himba tribe of Namibia. Davidoff learned that the Himba had no word for blue, and didn’t even distinguish between green and blue.

Maybe blue actually is special. It’s often the color used to signify royalty—probably because blue dye was so expensive. But what about the connection with ghosts?

As it turns out, there is another instance of blue having a correlation with spirits: Ghost Eyes. I’m not referring to a ghost’s eyes here, but rather, the pale blue eyes of certain breeds of dogs.

I learned about ghost eyes when my family got an Australian-Shepherd mix dog about ten years ago. Sunnie, our faithful canine companion, had strange, blue eyes, different from a Husky’s, and almost white. Not all Aussies have these blue eyes, and according to breeder websites, the term ghost eye comes from Native Americans who believed the dogs both sacred and to be avoided.

Whether you paint your porch blue, or get a dog with blue eyes, one thing is for sure—it’s nothing to be blue about, unless you’re spirit.
at 12:00 PM