Introducing a new feature at Stone Soldiers, If You Like... where we list similar-themed fiction and compare it to the Stone Soldiers book series. 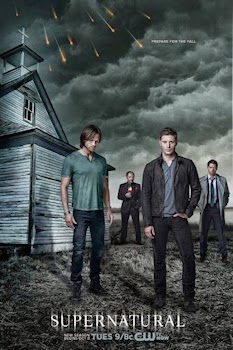 
This long-running series on the CW features monster-hunter brothers Sam and Dean Winchester (Jensen Ackles and Jared Padalecki) as they track down the terrible and kill it.

In the many years the show has been on, the brothers have faced off against nearly every kind of monster and legendary being imaginable. And where once this wasa typical monster-of-the-week show, the series has developed to include long-reaching story arcs similar to the X-Files UFO conspiracy.

In Season 8, viewers were shown a rebellion in Heaven, when a rogue Angel (Metatron, played by Curtis Armstrong) tricked series regular Castiel (Misha Collins) into sealing the gates of Heaven and casting out all the Angels. On the series, God has been absent over the past few seasons, as apocalyptic events have unfolded (and yes, the Winchesters have stopped the apocalypse on multiple occassions). In this power-vaccum, Metratron decides he's going to take over. The Winchesters have to figure out how to defeat Metatron as well as a host of other villains, including the last Knight of Hell, Abbaddon.

Supernatural features dark conspiracies, secret organizations, explosions, gunfu, butt-kicking and lots of clever dialogue. It airs weekly, on Tuesdays at 9PM on the CW. New episodes are normally posted to HuluPlus the following day, and you can catch up on past seasons on Netflix.

Stone Soldiers was at least partially inspired by Supernatural (I had recently finished binge-watching the series on Netflix right before plotting out my own series). But where the TV series follows two guys really, really good at killing monsters, Stone Soldiers follows a team of trained soldiers, backed up with the latest technology and the combined might of the United States Armed Forces. And while Sam and Dean may occassionally become supernatural, maybe even monsters, themselves, the Stone Soldiers are supernatural all the time, giving them an edge over evil--hence the book series motto Ex Malo Bonum:  from evil, good.

Both book and TV series further share a brand of sarcastic humor that is found in so many popular fictional properties. With a wisecracking Vampire that may just be a subconscious blending of Dean Winchester and River Song, a conspircy-theorist werewolf, a sardonic lightning-casting stone soldier and quite a few other homages to some of the finest SFF to grace TV in the past few decades. In fact, the character of Maria Guerrera, Mark Kenslir's amnesiac wife, was actually inspired by the true-life marriage of Jared Padalecki and series guest star Genevieve Cortese (as Mr. Padalecki might make a pretty good Mark Kenslir).

Where the two fictional universes part company is in the world setting. Supernatural takes place in what is effectively the real world. Stone Soldiers' universe is one where magic has survived into the moden era. The population is basically aware that things not normal exist, but few want to believe. Stone Soldiers' universe lays somewhere between the real world and that of a comic book universe such as Marvel has created, but with a decidedly supernatural twist.

And of course, the Stone Soldiers don't have any cool muscle cars like the Winchesters' beautiful 1967 Impala.

And there's way more explosions in Stone Soldiers. Which is a shame. The Winchesters could really use some bigger guns.